Home / News / Local / State officials give grave warning: Get off the roads during Sunday’s snowstorm 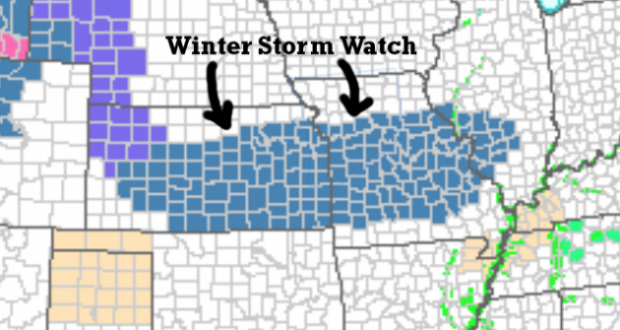 State officials give grave warning: Get off the roads during Sunday’s snowstorm

With a rare March snowstorm barreling towards Kansas and Missouri, state officials are warning drivers to stay home.

And while Saturday is the calm before the storm with even some sun peaking through and no snow expected until late evening, the Missouri Department of Transportation (MoDOT) has issued a rare statewide “no travel advisory” for the duration of Saturday night and Sunday’s day-long snowstorm. The National Weather Service (NWS) and MoDOT expect snow to begin late Saturday evening around 10 to 11 pm and continue into Sunday morning.

The National Weather Service tweeted earlier Friday, advising Missourians to stock up on bread and milk for the weekend.

In Kansas it’s the same story. The weather service there referred to the predicted conditions of the storm as a “dangerous situation” in their hazardous weather outlook. A winter storm warning has already been issued for central Kansas.

Forecasters with the Wichita branch of the National Weather Service predict 3-6 inches of snow accumulation across Kansas Saturday night into Sunday afternoon. Wind chills are expected to go between negative 10 and negative 15 degrees in most of central Kansas.

Missouri however, will see the brunt of the storm with snow totals approaching a foot in some areas of the state.

A NWS hazardous weather outlook calls for sustained north winds of 15-25 mph with gusts of 30-35 mph during the storm, causing blowing and drifting snow.

MoDOT is warning drivers to expect blowing snow that will reduce visibilities, adding that snow accumulation could reach one inch per hour.

MoDOT spokesman Gregg Ochoa says the agency will have about 1,500 snow plows available this weekend.

“We advise everyone to stay off the roads. At times, snow will be heavy (this weekend). For your safety, please stay home,” MoDOT state maintenance engineer Becky Allmeroth says.

NWS Springfield meteorologist Drew Albert says snow will be coming from the south and the west on Saturday night, into Sunday morning.

“We’re looking at colder air coming from the north meeting moisture coming from the west and the south, and unfortunately they’re going kind of meet in the middle,” Albert says.

The NWS says some of the heaviest snow will be from a line stretching from southwest Missouri’s Nevada to Osage Beach to Camdenton, about six inches.

For the Kansas City area they are saying heavy s now with blowing and drifting making driving difficult if not impossible.

“The heaviest snow we’re looking at is probably going to be after midnight Saturday night through around noon Sunday morning, in that time frame is what we’re looking at,” says Albert.

The Rolla area along Interstate 44 could also see six inches of snow.

The Columbia and Jefferson City areas are projected to see five to six inches of snow, while St. Louis and southeast Missouri’s Farmington should see six inches.

The Springfield and Joplin areas are expected to receive four inches. The NWS in St. Louis says six inches of snow are possible in northeast Missouri’s Hannibal and Bowling Green.

Northwest Missouri’s St. Joseph and Chillicothe are expecting about three inches. Far northern Missouri towns like Bethany and Memphis should see one to two inches of snow.

MoDOT encourages you to check their website this weekend, for the latest road conditions. You can also call MoDOT’s customer service center for road conditions 24-7 and speak to a live operator. That number is 1-888-ASK-MoDOT.

Click here to listen to the full interview between Missourinet’s Brian Hauswirth and National Weather Service meteorologist Drew Albert, which was recorded on March 1, 2019: