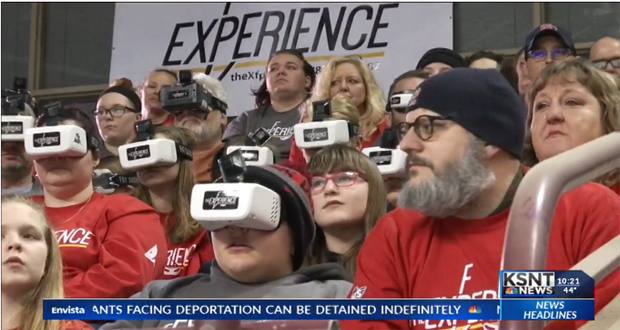 A screen capture from a KSNT video shows fans watching a Pilots hockey game using goggles that see through the players' eyes.

A Topeka man has come up with new technology that offers a new way to watch hockey.

Austin Wright started his company Experience FPV in January, and it offers a new experience. With his new technology, people can see real-time action by wearing his goggles. Wright teamed up with the Topeka Pilots to bring this entertainment to the games. With his goggles people can see exactly what the players see in real time.

“When we put our cameras on the players, and then the fans put the helmets on, they’re literally seeing what the players see,” Wright said in an interview with KSNT-TV. “When they see it, it really makes you feel like you’re on the ice.”

Not only is this making the game more interesting, it may even help bring in new fans who may not be that interested in hockey.

Wright sees lots of opportunity in his hometown outside of the ice rink also.

“There’s a lot of really exciting things going on in Topeka – the downtown, the hotel,” Wright said. “I think entrepreneurship makes the world go ‘round. I’m so excited to be a part of the whole Topeka movement. It’s really an honor.”

Wright’s company is providing all of his equipment and goggles for the games free of charge, as they’re deciding whether or not they will keep the technology at the games.

Previous: ‘Jesus’ debuts on the History Channel
Next: Facebook censorship reaches into the White House