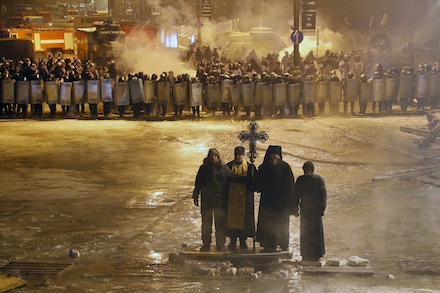 KIEV, Ukraine (BP) — Scripture portions helped provide a flicker of faith as violence escalated in Ukraine on Feb. 18. At least 25 were killed and hundreds injured as government forces acted to forcibly remove protesters from Kiev’s Independence Square. The dead include civilians and police officers.

The Interior Ministry demanded that protesters leave the square by 8 p.m. Tuesday. When the deadline passed, riot police dismantled barricades with the help of armored vehicles, water cannons and stun grenades.

Some protesters responded by throwing Molotov cocktails and paving stones dug up from the streets.

But churches near the mayhem responded differently.

“Thousands of Scripture portions have been distributed and the prayer tent on Independence Square is very active,” said International Mission Board worker Tim Johnson*, who was in close proximity to the violence Tuesday. 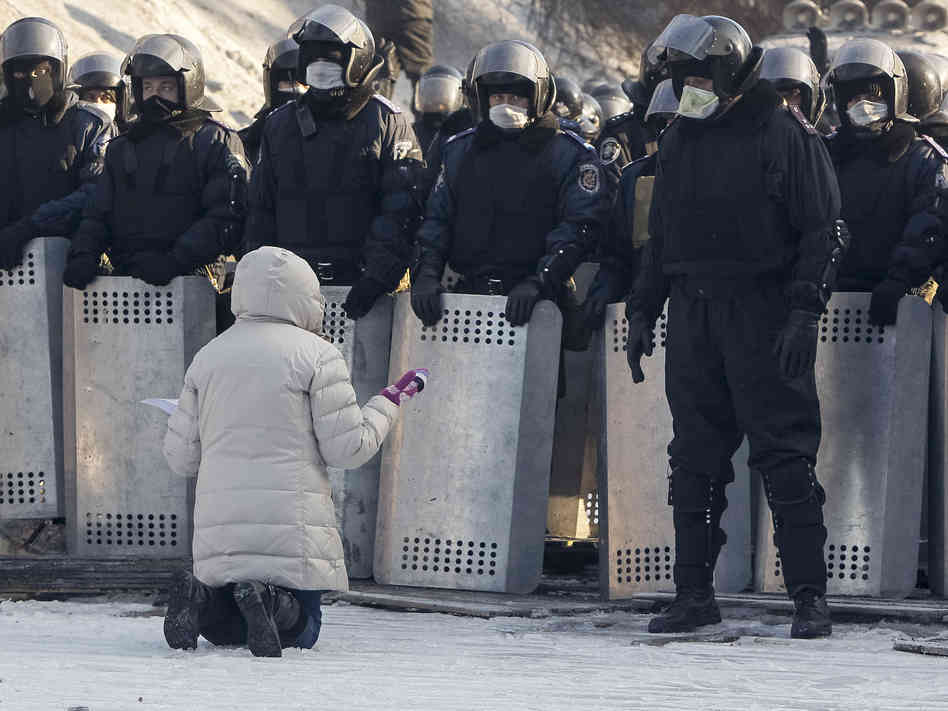 A protestor prays in the path of Ukrainian police who are advancing on the pro-democracy demonstrators.

Many churches have been using a tent-based outreach in Independence Square to pray for individuals, serve hot tea, hand out tracts and share their faith during the three-month upheaval in Ukraine and its capital city, Kiev.

It is unclear what sparked the mid-February sudden rise in violence, with each side blaming the other. Protests began Nov. 21 when Ukrainian President Viktor Yanukovych backed away from a trade deal with the European Union in favor of accepting financial aid from Russia. The conflict has now been named “EuroMaidan,” Ukrainian for “Eurosquare.”

“Tensions in the center of Kiev are extremely high,” Johnson said. “I was downtown when the metro system was shut down so I joined the ranks of the walkers, trying to find a bus that would stop. Since they were overloaded, there were dozens of people at every stop trying to board, but only one or two might crowd in. I walked two hours from downtown to our apartment, but it was a good time to prayerwalk.”

Johnson said all IMB personnel in Ukraine are safe and in contact with local believers to support their efforts to share Christ in the midst of the violence.

Brady Sample*, an IMB worker who lives in Kiev, said God is at work even amid the violence.

“This past month we have seen an amazing outpouring of God’s Spirit,” said Sample, who works closely with the Ukrainian Baptist Union, the largest evangelical association of churches in the country, which is calling for members to pray for a peaceful solution to the conflict.

“They are not taking sides and not encouraging the protests,” Brady said. “They are praying for our country to turn to God.”

Sample has been meeting with Christian leaders about discipleship and talking with individuals who want to discuss spiritual issues.

“God is moving. This event is causing people to pray, and while they are praying for peace in the land, God is trying to bring peace into people’s hearts,” Sample said.

“I encourage each believer to pray to the Lord, that He would stop the violence and bloodshed in our country,” Nesteruk said. “Let us savor Christ in every place. Let us do good. Help those in need. Urge those around us to be at peace. We preach love and forgiveness. Remember that everyone will give account not only to the law of the state, but to God.”

In an earlier Baptist Press report, International Mission Board worker Larry Forbes* described the city center in Kiev where the protesters had set up camp as like a city within a city.

“People bring in food and supplies and wood…. who are down there are not planning on giving up — they are digging in,” Forbes said.

EU-related talks over the Jan. 31-Feb. 2 weekend in Germany gave EuroMaidan protesters resolve to push ahead with demands for President Yanukovych to resign. The military’s recent support of the government has further hardened their resolve.

“There is a general feeling that Russia is going to intervene at some point,” Forbes said. Eastern Ukraine is strongly Russian in its identity, but the western part tends toward European influence. Forbes suggested many think Russia will use the connection with the east to justify lending their help to bring order to the country. With a population of 45 million, Ukraine is experiencing tension between an older generation with loyalty to Russia and a younger generation with ties to Western influence, particularly the European Union.

In spite of potential violence, Forbes had said he and his colleagues were not fearful.

“Pray for what we’re doing — what we believe God called us to do,” Forbes said, noting that the primary thing Ukrainian believers desire is for a peaceful solution and for God to bring the nation to Himself.

Contributing to the tension: a package of legislation suppressing political dissent that was rammed through Parliament in mid-January by Yanukovych supporters, but the president agreed to revisit the action in an upcoming special legislative session. As it is, the legislation categorizes protesting against the government as “slander,” punishable with a 15-year prison term, and it calls organizations that receive funding from outside Ukraine “foreign agents,” penalizing them with a tax, according to Mission Network News.

Michael Cherenkoff of the Kiev-based Russian Ministries likened the new laws to Stalin’s Soviet Union of 1937. Many of the Christian ministries operating in Ukraine previously operated in Russia but left because of religious freedom concerns, Mission Network News reported.

“It’s much like Russia’s laws but much worse,” Cherenkoff told Mission Network News.

Slander is not clearly defined under the new legislation, and Cherenkoff said this is “a very Soviet approach to the church to society.” Usually, citizens would be given time to express their opinions about potential new laws, but in this case the president signed the legislation with no chance for discussion.

*Names changed. This article includes reporting by Nicole Lee, an IMB writer based in Europe. Get Baptist Press headlines and breaking news on Twitter (@BaptistPress), Facebook (Facebook.com/BaptistPress) and in your email (baptistpress.com/SubscribeBP.asp).

Previous: I Didn’t Join to be Sacrificed
Next: Faith Driven Consumer: An Open Letter to Hollywood 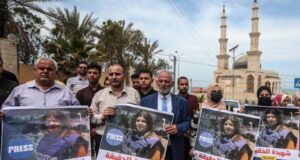 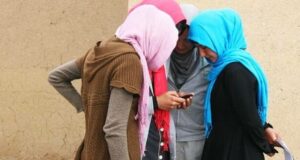 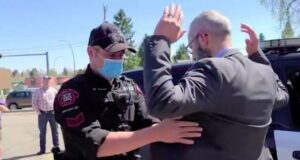 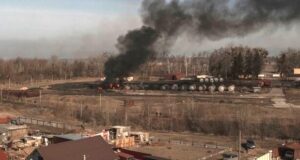 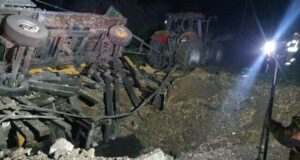 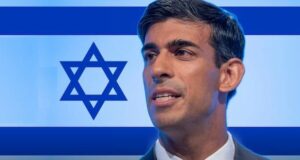