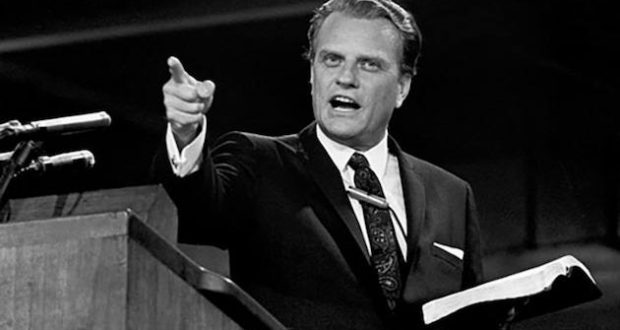 You can watch the service via your phone or computer. Click HERE to watch it live.  The service, in which about 2,300 people will attend, will take place in at the Billy Graham Library in Charlotte, North Carolina.  It will be broadcast live on local television and may also be broadcast by Fox News and CNN as part of their regular morning news programming.

It is fitting that it will be in a large a white tent, as it captures the ‘Canvas Cathedrals’ that were a hallmark of his early crusades that propelled his evangelism ministry and made him one of the most influential Christians of the 20th century. The funeral message will be delivered by his oldest son, Franklin Graham. The large storm moving up the East Coast is expected to bring tropical, and possibly stronger, winds.  the company that made the tent has assured them that it can stand up to even hurricane-force winds.

Among the guests expected to attend are President Donald Trump and worship artist Michael W. Smith will sing “Above All” and the Gaither Vocal Band will perform one of Graham’s favorite hymns, “Because He Lives.”

True to how he lived his life, the Gospel will be central to Graham’s funeral service. His son Franklin Graham will preach. Other members of Graham’s family – including 11 of his grandsons – will serve as pallbearers. They will alternate accompanying the casket to and from the tent.

“It was Mr. Graham’s explicit intent that his funeral service reflect and reinforce the Gospel message he preached for more than 60 years,” said DeMoss.

After the service, Graham will be laid to rest next to his wife Ruth at the foot of a large cross-shaped brick walkway in the Library’s Prayer Garden.

Graham died last week at the age of 99 after a lifetime devoted to spreading the Gospel.  At the peak of his evangelism ministry, hundreds of thousands of people packed into stadiums to hear his impassioned pleas to embrace Jesus as their personal Savior.

He was a personal friend of Queen Elizabeth II and was one of the few Christian leaders to counsel generations of U.S. presidents, having met every single U.S. president who served between World War II and the time of his death.

In a statement following his death, Trump praised Graham as “one of the towering figures of the last 100 years—an American hero whose life and leadership truly earned him the title “God’s Ambassador.”

“Billy’s unshakeable belief in the power of God’s word to transform hearts gave hope to all who listened to his simple message: “God loves you,”‘ he said.

“I will never forget the first time I saw him, 60 years ago in Little Rock, during the school integration struggle. He filled a football stadium with a fully integrated audience, reminding them that we all come before God as equals, both in our imperfection and our absolute claim to amazing grace,” he said.

“Later as Governor, in the White House, and afterward, I saw him live that faith fully in the constant kindness, encouragement, and counsel he extended to Hillary and me.”