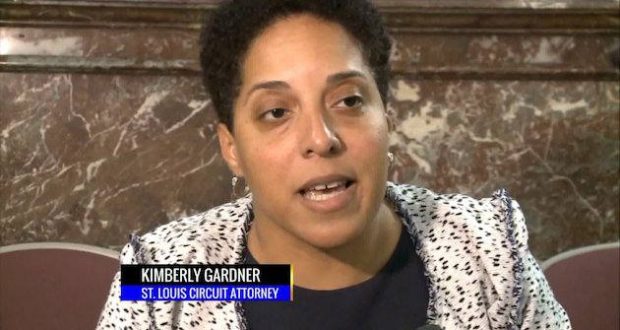 The spokesman for the St. Louis Police Department says the office of democrat Circuit Court Attorney Kim Gardner, who is leading the charge against Gov. Eric Greitens, is not telling the truth about facts of the investigation itself. That charge comes as St. Louis prosecutors have admitted they do not have key evidence central to their indictment of Greitens. That evidence is an alleged photo at the heart of the case.

Circuit Attorney Kim Gardner and assistant prosecutor Robert Steele say they hope to find the photo and were in court along with Greitens’ lawyers for a hearing in which Circuit Judge Rex Burlison set a May 14 trial date for Greitens on invasion-of-privacy charges.

Read more about Greitens being indicted

Greitens was indicted last week, accused of taking an unauthorized photo of a woman with whom he was having an affair. He has admitted to the affair but denied criminal wrongdoing.

During the court hearing, defense attorney Jim Bennett told the judge he was informed by prosecutors “that the photo in the indictment doesn’t exist.”

Steele told Burlison that Bennett’s characterization was wrong. He said prosecutors don’t have the photo “yet.”

“I did not tell them the picture doesn’t exist. I told them we don’t have it in our possession at this time,” Steele said. “We plan to get that picture.”

Steele did not elaborate. Attorneys from both sides declined comment after the hearing. Gardner’s spokeswoman, Susan Ryan, would not discuss the.

As the trial has been confirmed, members of the Missouri House have launched their own bipartisan investigation that could determine whether to initiative impeachment proceedings against Greitens who once considered a rising star in national politics.

Greitens, his lawyers and the state Republican Party have said the investigation and indictment are politically motivated. Greitens called Gardner, a Democrat, a “reckless liberal prosecutor” in a statement last week.

Then a bombshell revelation hit. Gardner on Tuesday confirmed that her office hired a private company, Enterra LLC of Michigan, to perform the investigation that led to the indictment, rather than using the St. Louis police which is normal practice..

This unusual news of an outside investigator comes as the Garnder’s spokeswoman, Ryan, has made statements that the St. Louis Police Department say are false.

Ryan said the office first asked St. Louis police for help but was directed to the FBI, which in turn said the investigation was out of its jurisdiction. But police department spokeswoman Schron Jackson said in an email Wednesday that the department “was not asked then or now to investigate Eric Greitens.” St. Louis Mayor Lyda Krewson, a Democrat, declined comment.

This has continued to fuel speculation that the charges, and now indictment, are politically motivated.

Dowd said an open records request revealed the company has already been paid at least $10,000.