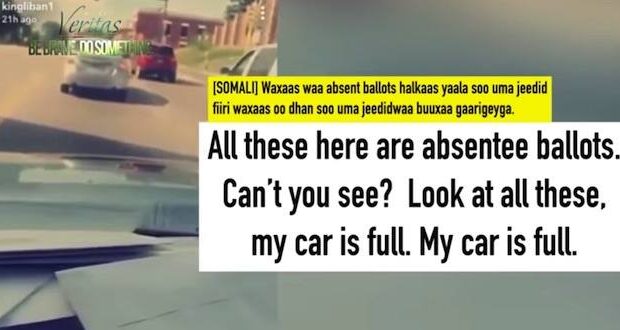 As mainstream media asserts there is no evidence of mail-in voter fraud, a major example is under investigation in Minneapolis.

The Minneapolis Police Department is now investigating a ballot harvesting and vote-buying scheme by supporters of Rep. Ilhan Omar, D-Minn. Police were tipped off after release of viral videos produced in a sting operation by Project Veritas.

Minnesota law limits the number of absentee ballots that someone can help another person cast to only three, though the state Supreme Court recently said that law may be unenforceable this election.

And in a fourth clip obtained by Project Veritas, a man can allegedly be seen buying a voter registration form from a man for an absentee ballot in exchange for $200. After the buyer explains how to fill out the form, the voter says, “Yes… tonight we will close the deal. Okay?”

Omar Jamal, who Project Veritas describes as a “Somali community insider and the Chairman of the Somali Watchdog group,” alleges that Rep. Omar is involved in the scheme.

“Nobody would say that Ilham Omar isn’t part of this. Unless you’re from a different planet, but if you live in this universe, I think everybody knows it,” Jamal says.

Appearing on “Hannity” Monday night, James O’Keefe, founder of Project Veritas, said, “This is incontrovertible evidence, the first time we’ve actually seen the deed being done on tape. The media says there is no evidence, even the director of the FBI last week said there is no evidence of voter fraud. Well there you have it.”

“This is the story that may change things. It is all on tape. They can no longer deny it,” O’Keefe added.

“The Minneapolis Police Department is aware of the allegations of vote harvesting. We are in the process of looking into the validity of those statements,” the department said in a statement on Monday. “No further information is available at this time on this.”

Additionally, “Hennepin County Attorney Jeff Wojciechowski told a Project Veritas journalist on a recorded line the ballot harvesting conduct described to him was: ‘Illegal, and we will be investigating.’”

The president voiced his thoughts on the video on Sunday. “This is totally illegal,” President Trump said. “Hope that the U.S. Attorney in Minnesota has this, and other of her many misdeeds, under serious review??? If not, why not??? We will win Minnesota because of her, and law enforcement. Saved Minneapolis & Iron O Range!”

“The amount of truth to this story is equal to the amount Donald Trump paid in taxes of ten out of the last fifteen years: zero. And amplifying a coordinated right-wing campaign to delegitimize a free and fair election this fall undermines our democracy,” he said following the release of the tape.