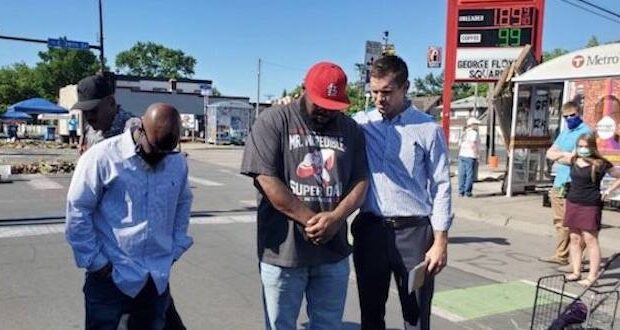 Participants in a Philos Project trip to Minneapolis, Minnesota pray near the site of George Floyd's arrest and the outbreak of violence on June 11, 2020. (Photo: Jeff Walton / IRD)

Racial injustice and unrest are a spiritual battle that must be fought with spiritual weapons, according to African-American leaders in Minneapolis, Minnesota.

In at least one case, local armed residents defended a grocery and pharmacy from attack.

“I believe in the Second Amendment and the right to bear arms,” noted Pastor Jerry McAfee of New Salem Baptist Church, who helped organize a neighborhood patrol guarding the establishment. “I’ll be nonviolent with those who are nonviolent with me.” 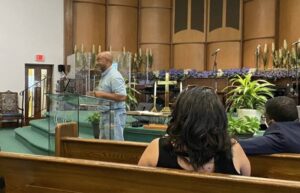 McAfee was one of many Black pastors that I met with for a fact-finding tour of the epicenter of protest, looting and violence unleashed after the death of George Floyd on May 26. Floyd, a 46-year-old black man, died following an arrest. He is alleged to have used a counterfeit $20 bill.

Floyd’s name now appears among the long list of names of unarmed African-American persons who lost their lives in police violence, painted on the Minneapolis street surface where I prayed with local Christians who minister among those facing long-running hurt, suspicion and mistrust. They are not surprised at what transpired; rather we were told it is the surprise of White Christians that is new.

The trip was organized by the Philos Project, whom readers will recognize as co-founders of IRD’s foreign policy journal, Providence. Philos’ work focuses around positive Christian engagement, customarily in the Near East. But in this season of heightened racial unrest and protest there is an urgent opportunity to listen to those facing conflict here in the United States.

We shared time with local pastors who have a ministry among majority-black communities and across the Twin Cities. Not all of their views are the ones I have heard relayed by news sources.

I’m all too aware that law enforcement in minority communities is far outside my experience, raised in the suburban West, not to mention my upbringing in the Episcopal Church. I was mindful of this as we drove past a looted and burned Target store near Minneapolis’ 3rd Precinct police headquarters; overran and set aflame the night of May 28. 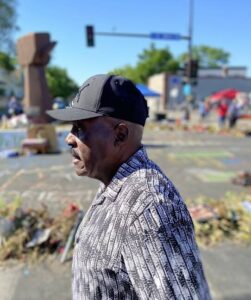 Minneapolis Activist Spike Moss walks through the intersection where George Floyd was arrested in May (Photo: Jeff Walton / IRD).

Those we met with all made reference to outside agitators causing trouble in their neighborhoods, although the identity of those agitators and their purpose varied depending on whom we spoke with. Some, like Minneapolis activist and self-described “freedom fighter” Spike Moss, blamed white supremacist groups, including but not limited to the Aryan Nations, for violent, provocative incursions into black neighborhoods. Others pointed to anarchist and far-Left groups like Antifa, blamed for inciting violence and committing arson on local businesses and even churches.

In a north Minneapolis neighborhood near looted grocery stores and some businesses destroyed by fires, we were welcomed by the Man Up Club, a Christian mentoring program for young black males age 12-24 that partners with local churches.

“We need young black males to police their own communities” Man Up Club founder Korey “Xross” Dean shared about a “black and blue” program for those who want to pursue career in law enforcement. 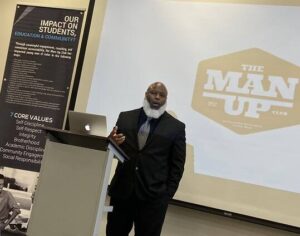 Dean’s comment recalls earlier concerns voiced in Ferguson, Missouri about difficulties accompanying a police force that does not reside in a jurisdiction they are tasked with serving and protecting. But a majority-black police force in and of itself does not necessarily preclude inner city tensions, as conflict in Atlanta (58% African-American police force) has since showed.

There were significant opportunities for prayer.

“One thing we’ve heard over and over again from local Black leaders: ‘This is a spiritual battle that must be fought with spiritual weapons,’” Nicholson noted.

Channeling the frustration of the Black community, Pastor Carmen Means leads a church known simply as “The Movement” and was direct: “There needs to be true repentance, and more than just conversation and dialogue. Repentance means action.” 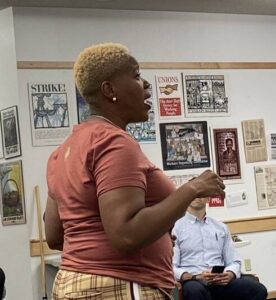 Means runs a community center on the same block as Cup Foods, the site of Floyd’s street corner arrest now festooned with flowers and art, which had the feel of a pilgrimage site.

At the impromptu memorial fashioned by those seeking to remember Floyd, we prayed with Alphonso, local resident who told of the challenges of both welcoming people to the memorial and also seeing that it does not transform into a street fair. He shared that they have a few times suggested to outsiders that they move along, fearful that some have incendiary intent.

Minnesota and the Twin Cities are majority-white, and many of those are struggling to come to terms with racial conflict that has emerged into full view.

“Fruit of repentance will ask for something to die,” says Assemblies of God Pastor Mike Smith of the suburban Redeeming Love Church about the current moment in Minneapolis. “We are approaching a time where everyone will be required to empty something from themselves.” 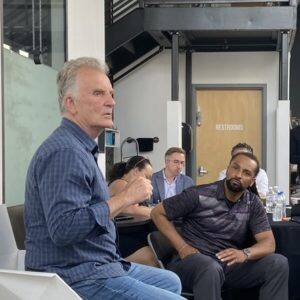 “To be woke is guilt-fed, awakening is conviction-fed,” Smith shared about what is own congregation is learning.

–By Jeffrey Walton. From JuicyEcumenism.com. Used with permission.