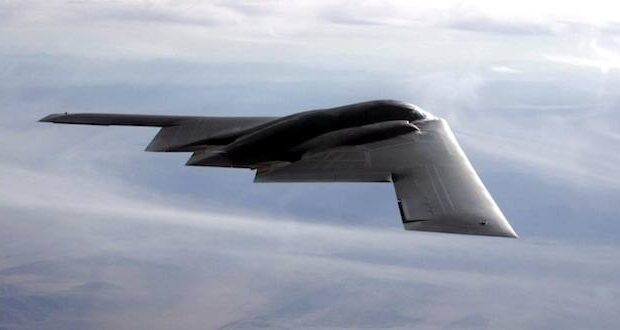 Whiteman Air Force Base pilots flew over medical facilities in Kansas City on Tuesday to honor and express gratitude for all medical and health-care professionals, essential employees and volunteers in the fight against COVID-19.  The B-2 Stealth Bomber is based at Whiteman AFB in West Central Missouri.

The flight drew spectators from the 7 counties that make up the metropolitan region of Kansas City. In Lee’s Summit and other communities, thousands pulled over to the side of roads, filled parking lots and neighborhood cul-de-sacs and backyards to see the site.

“We are in this fight together,” said Col. Jeffrey Schreiner, 509th Bomb Wing commander. “While defending the homeland has taken a new shape, we are proud to serve alongside those who serve in and out of uniform. This flyover is our way of sending a heartfelt salute and ‘thank you’ to all those on the frontlines in the fight against this virus. Without their dedication and hard work, we would not be able to execute our vital, strategic mission.”

Quick edits from #WhitemanSalutesKC flyover of @SaintLukesKC-East. The @cityofLS community came out, social distanced, and had a quick moment of bonding. #TogetherLS THANK YOU @Whiteman_AFB, healthcare and essential workers! ❤️ pic.twitter.com/BOXIbfBt8J

Metro Voice readers who missed the event can view a live Facebook report posted to the Metro Voice facebook page.

The U.S. Air Force performs almost 1,000 flyovers each year, to include air shows, national-level sporting events, and any event in support of a patriotic holiday. Flyovers are fully functional training missions, designed to maintain the lethality and readiness of Air Force pilots and maintainers; they are conducted at no additional cost to taxpayers and are incorporated into existing flying schedules.