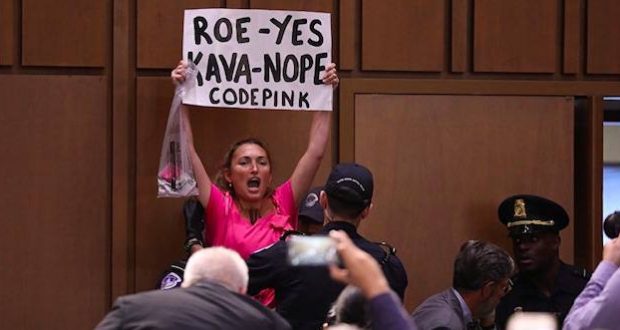 As Senate Supreme Court confirmation hearings entered their second day, there was no lack of theatrics by those seeking to disrupt hearings over nominee Brett Kavanaugh.

The fireworks again erupted Wednesday at the moment Brett Kavanaugh entered the Senate’s Judiciary Committee room. He was met with a steady stream of hecklers from the upper public viewing area. 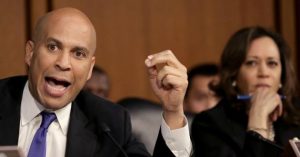 Several Democrats, including Sens. Cory Booker (D-N.J.) and Kamala Harris (D-Calif.) tried to scuttle hearings for Judge Brett Kavanaugh’s Supreme Court confirmation, but critics said their words mattered little after they agreed to continue with the proceedings instead of walking out of the hearing room.

It has been reported that hecklers were overheard in the hallways discussing their “protests” and which day they were scheduled to disrupt and be arrested.

Of the dozens of hecklers forcibly removed so far, all have received their official Senate Gallery passes from the offices of Democrat Senators.

It was a continuation of organized protests on Tuesday though the disruption wasn’t limited to protesters in the galley.

“I welcome everyone to this confirmation hearing for the nomination of Judge Brett Kavanaugh,” said Chuck Grassley, the Senate Judiciary Committee chairman.

Even before finishing his sentence, Grassley was interrupted by Kamala Harris, the Democratic senator from California.

“Mr. Chairman? Mr. Chairman?” Harris, who is also promoting herself as a future democrat presidential nominee, kept interrupting Grassley. “I’d like to be recognized. I’d like to ask a question before we proceed.”

Then, right on que, the session was interrupted numerous times by protesters in the gallery.

“This is a travesty of injustice,” a female protester yelled from the back of the room.

Democrats have waged an all-out effort to delay the nomination of judge Brett Kavanaugh to the Supreme Court.

“We believe this hearing should be postponed,” said Sen. Amy Klobuchar (D-Minn).

Democrat after democrat Senator interrupted the proceedings, often talking out of turn and without the acknowledgment of the chair, demanding the hearing be stopped. It became so bad that democrats began talking over one another in their rush to interrupt the Republican chair or nominee Kavanaugh.

Democrats were repeatedly reminded that they were not in executive session and postponing the hearing was not legal.

Their beef? The Democrats received what they asked for over the weekend. Monday night, the White House released some 42,000 documents related to Kavanaugh’s work with previous administrations.

Democrats argued they needed more time to look through the documents but failed to ask for those documents last week.

The White House shot back with the administration’s deputy press secretary Raj Shaj tweeting, “By my count, in the opening 30 mins and this Democrat tantrum, well over a dozen references to documents, and ZERO references to Judge #Kavanaugh cases, votes or record as a judge for the past 12 years.”

Political observers have said they have rarely seen democrat members act in such a way with cameras rolling.

Despite their repeated objections, Sen. Grassley wasn’t budging and proceeded with the day’s opening statements from both sides of the political aisle.

Previous: Texas cheerleaders win case against censorship
Next: Income Tax Course to be offered in Topeka