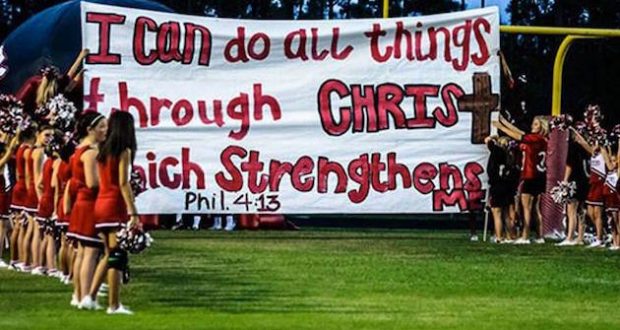 Some Texas cheerleaders have another victory to cheer. The Texas Supreme Court has declined to hear an appeal of a lower court decision that protects the right of cheerleaders to display Bible verses on run-through banners at school football games.

“After more than five years of litigation, our clients are relieved that the Texas Supreme Court has brought an end to the school district’s scorched-earth litigation tactics,” said one of the cheerleaders’ attorneys, Hiram Sasser, who serves as general counsel at First Liberty.

In 2012 the Kxountze Independent School District claimed that the cheerleaders’ banners represented official government speech, so the district had the right to censor them whenever it chose.

It was a strange contention the school district was making. Do cheerleaders serve as official spokesperson for the government when cheering? The district drew more than its share of scorn and ridicule for what many considered a pretty far out view.

The cheerleaders, joined by their attorneys, insisted the student-made signs represented the private speech of the cheerleaders and were protected under Texas law.

The 9th Court of Appeals in Beaumont agreed, ruling last year that the verses on the banners were not government speech and thus could not be censored by school officials – a ruling that will stand, thanks the decision by the Texas high court.

“As the football season kicks off across Texas, it’s good to be reminded that these cheerleaders have a right to have religious speech on their run-through banners—banners on which the cheerleaders painted messages they chose, with paint they paid for, on paper they purchased,” Sasser noted.

“School districts everywhere should learn an important lesson from this failed litigation by the Kountze Independent School District: Stop harassing cheerleaders and accept that they are free to have religious speech on their run-through banners,” he added.

“No school district should be able to censor, ban, or claim ownership of the private religious speech of its students,” he said in a statement. “Hopefully, this will prevent Kountze ISD from spending another dollar on attorneys intent on filing yet another frivolous legal attack on cheerleaders.”

Meanwhile, Texas Attorney General Ken Paxton hailed the move as a win for religious liberty, noting that the free exercise of one’s faith is the very principle upon which America was founded.