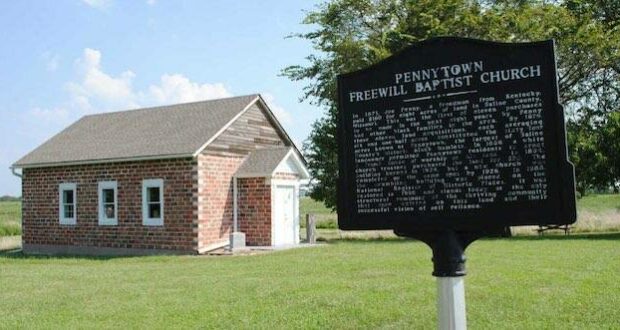 “When I come to this church, I walk in, and I see and feel and hear my ancestors,” says Clarence Lawrence, one of the few remaining descendants of a town founded by freed slaves after the Civil War.

Known as Pennytown, the hamlet’s creator was Joe Penny and today, Pennytown Freewill Baptist Church is the last building standing. Lawrence is working to keep this crucible of history alive.

“Everybody wants to know where they came from,” Lawrence said. “People that don’t know anything about their history can come right here and put their finger on it.”

This town, located five miles north of I-70 at the 65 Hwy/Sedalia exit was born after the Civil War. Joe Penny bought eight acres of land from a white farmer for $160. He divided up the land – and the acres around it – among newly freed Black Americans.

“What was unique about Pennytown is that the Pennytowners actually owned their own property,” Lawrence said. “The homes that they built were from barns of local white residents. They had to put newspaper in the walls for insulation. Some of the homes had dirt floors.” 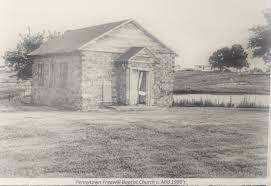 Men worked on white farms. Women worked in white homes. Children took a bus 20 miles to the nearest high school. But for the residents of Pennytown, owning their homes and praying in their own church were early steps to taking control of their story and their lives.

“For African-American communities, very often the narrative has been controlled by people who live outside of those communities,” said Dr. Douglas Flowe, a professor at Washington University in St. Louis.

Efforts have begun in 2021 to honor that story. The National Trust for Historic Preservation has raised $50 million to protect overlooked symbols of Black society. This summer the group announced $3 million in grants for 40 Black communities. For every Denver and Cleveland, for every Kansas City and St. Louis, there’s a Luther, Oklahoma or Hardin, Kentucky: places whose voices and stories are fading.

A similar grant is the only reason Pennytown’s one building still stands.

“It’s important to save the church because that was the only thing that was left,” said Lawrence. “I mean, that was it. That’s all we had. We had to save it.”

Josephine Lawrence, Clarence’s mother, secured a federal partnership decades ago to make the church a historic landmark. Today, her son maintains it as a museum.

Pennytown never became Kansas City or St. Louis. It was too small and too far removed to stick around once big cities called. But in the decades of its heyday, this town named for a Penny did exactly what its community needed, and more. It still does today, through its last building standing.

“The feeling that you get here is just, for me, so powerful,” said Lawrence. “And we want to preserve that.”

Previous: What ‘The History of the Decline and Fall of the Roman Empire’ got wrong about Christians
Next: Israel is on the ground helping Kentucky residents recover from tornado