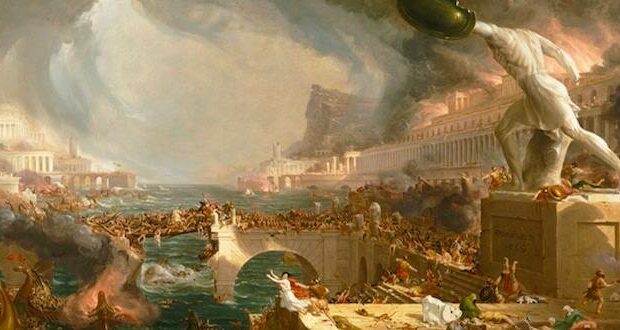 The sack of Rome, 410 A.D. Attempts to scapegoat Christians led St. Augustine to compose The City of God as a defense. Rome’s problems weren’t the result of Christian piety but political and cultural corruption.

For two centuries those who defended the Roman empire blamed its destruction on Christianity but the facts reveal a much different story.

In The Devil’s Dictionary, the writer Ambrose Bierce offered this definition of History: “An account mostly false, of events mostly unimportant, which are brought about by rulers mostly knaves, and soldiers mostly fools.”

Before you dismiss Bierce’s cynical perspective, remember that historians are mortals. Some are very good at what they do, others are quite bad at it, and most fall somewhere in between. Even the best of them may find their way to the wrong conclusions. They may over-emphasize some factors while under-emphasizing others or allow their personal biases to color what they write.

The British author and parliamentarian Edward Gibbon (1737-1794) was celebrated as one of the greatest historians of his day. More than two centuries later, he is still considered an authority on ancient Rome because of the six-volume magnum opus that made him famous: The History of the Decline and Fall of the Roman Empire. Gibbon deserves considerable credit for taking on such a massive project, for his extensive use of primary sources and even for his appealing prose. But in answering the central question of what caused the Empire’s fall, Gibbon failed utterly. He said the Christians did it.

Thankfully, six volumes are not necessary to puncture Gibbon’s dubious interpretation. Just a few inconvenient facts are sufficient. For example, he focused on the Roman Empire in the West, which fell to invaders in 476 A.D. Gibbon didn’t deal with this huge and inconvenient contradiction: Why did the Eastern Empire, which was centered in Constantinople and was even more Christian, flourish for another thousand years after the fall of the West?

Moreover, Gibbon concentrated on the period of Roman history known as the Empire—from Augustus, who ruled as the first emperor from 27 B.C. to 14 A.D., to Romulus Augustulus, who reigned for less than a year before his deposition by the barbarian Odoacer in 476. For nearly 500 years before Augustus, and 500 years before the birth of Jesus Christ, Rome was a Republic with liberties the rest of the world lacked. Civil strife, moral decline, and a growing welfare/warfare state snuffed out the Republic decades before Jesus began his ministry. The Empire that followed was a very different place, debauched from its start by the embrace of dictatorship. By the time Constantine legalized Christianity early in the Fourth Century A.D., the clock was ticking on a dying regime.

So why did Gibbon blame the Christians, persecuted for most of the Empire’s history, for its demise? In his own words,

The clergy successfully preached the doctrines of patience and pusillanimity; the active virtues of society were discouraged; and the last remains of military spirit were buried in the cloister. A large portion of public and private wealth were consecrated to the specious demands of charity and devotion, and the soldiers’ pay was lavished on the useless multitudes of both sexes who could only plead the merits of abstinence and chastity. Faith, zeal, curiosity, and more earthly passions of malice and ambition kindled the flame of theological factions, whose conflicts were sometimes bloody and always implacable; the attention of the emperors was diverted from camps to synods; the Roman world was oppressed by a new species of tyranny, and the persecuted sects became the secret enemies of the country.

Elsewhere in Decline and Fall, Gibbon identifies the “discouraged” virtues in the Empire as “a strong sense of our own interest in the preservation and prosperity of the free government of which we are members.” He noted that such patriotic consensus, rooted in active and broadly-based participation in public affairs, was prevalent under the Republic and “had rendered the legions of the Republic almost invincible.”

But by the late imperial period, is it reasonable to blame anybody for abandoning the Roman State? It was so corrupt and tyrannical that I, a fan of the old Republic, wouldn’t have fought for it either.

With a handful of notable exceptions, most Roman emperors were murderers, tyrants, thieves, and lunatics. They crushed the Roman people with confiscatory taxation and monetary debasement to pay for their adventures abroad and their debilitating welfare state at home. 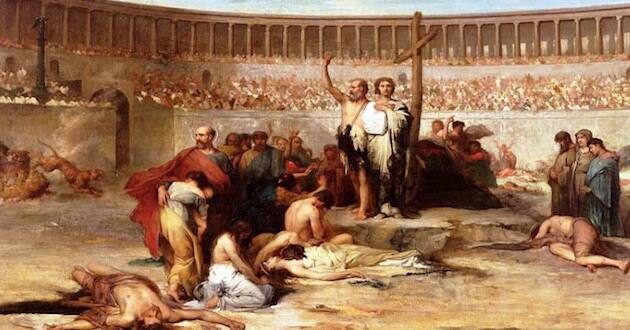 Despite his reputation as a wise and Stoic philosopher-king and one of the few “good” emperors, persecution of Christians increased during the reign of Marcus Aurelius (161-180 A.D.). His son and successor Commodus (180-191) was a bloody megalomaniac. Even Constantine (306-337), who granted toleration to the Christians, was a lousy Christian; he killed his own wife and son, for instance, and did not convert to Christianity himself until his deathbed. The emperors to follow were an unimpressive lot whose conduct and rule inspired almost no one.

What about Gibbon’s claim that the legalization of Christianity drew resources that might have otherwise gone for strengthening the Roman state? Historian Peter Heather finds that assertion unpersuasive:

Christian institutions did, as Gibbon asserts, acquire large financial endowments. On the other hand, the non-Christian religious [pagan] institutions that they replaced had also been wealthy, and their wealth was being progressively confiscated at the same time as Christianity waxed strong…. Likewise, while some manpower was certainly lost to the cloister, this was no more than a few thousand individuals at most, hardly a significant figure….

The death of the Empire in the West in 476 was anti-climactic, perhaps the longest suicide (500 years) in world history. Along the way, the rise of Christianity may have been bad news for the all-powerful State, but it was good news for many individuals. Thanks largely to a lowly Christian monk named Telemachus, for example, the brutal gladiatorial duels in Roman amphitheaters ended early in the 5th Century.

Edward Gibbon may have been predisposed to find fault with religious groups. In his personal life, he bounced between Protestantism and Catholicism (tepid in both instances) and entertained anti-Semitic sentiments. We may never know what his motivation was in blaming Christians, but it arguably was not the facts.

Indeed, the salutary impact of Christianity on the course of history is routinely sold short, as amply illustrated in Alvin J. Schmidt’s marvelous book, How Christianity Changed the World. I strongly recommend it.

Will Durant, a historian at least as good as Gibbon was, argues that “the growth of Christianity was more an effect than a cause of Rome’s decay.” His explanation for that decay is far more convincing than Gibbon’s scapegoating of the Christians. The real causes, Durant asserts, lay in such policy calamities as “the rising cost of armies, doles, public works, an expanding bureaucracy, and a parasitic court; the depreciation of the currency; the discouragement of ability, and the absorption of investment capital by confiscatory taxation.” In his magisterial Caesar and Christ, he explained:

The breakup of the old religion had begun long before Christ…Moral disintegration had begun with the Roman conquest of Greece [in the 2nd Century B.C.], and had culminated under Nero [in the mid-1stCentury A.D.]; thereafter Roman morals improved, and the ethical influence of Christianity upon Roman life was largely a wholesome one. It was because Rome was already dying that Christianity grew so rapidly. Men lost faith in the state not because Christianity held them aloof but because the state defended wealth against poverty, fought to capture slaves, taxed toil to support luxury, and failed to protect its people from famine, pestilence, invasion, and destitution; forgivably they turned from Caesar preaching war to Christ preaching peace, from incredible brutality to unprecedented charity, from a life without hope or dignity to a faith that consoled their poverty and honored their humanity. Rome was not destroyed by Christianity, any more than by barbarian invasion; it was an empty shell when Christianity rose to influence and invasion came…. The political causes of decay were rooted in one fact—that increasing despotism destroyed the citizen’s civic sense and dried up statesmanship at its source.

Edward Gibbon deserves to be read but don’t take everything he wrote as Gospel.

Previous: How do Christian-Jewish families navigate the Christmas tree?
Next: Descendants work to preserve historic Black church in Pennytown, Missouri