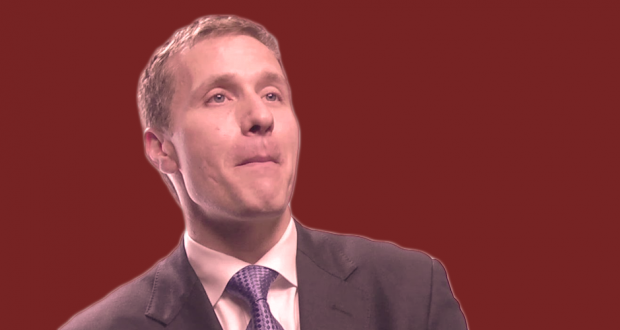 The audio of a 10-minute phone conversation between Eric Greitens and John Brunner that happened in late November of 2015 is posted online at stltoday.com.

Every voter casting a ballot in the Republican primary for Governor should consider listening to that entire 10-minute audio before casting a vote on August 2nd.

Greitens called Brunner a weasel, coward, liar and corrupt. When I heard his whiny, bratty, childish, juvenile, disrespectful, condescending, patronizing, controlling and unprofessional tone−that did it for me.

John Brunner is a former Marine, successful business owner, missionary leader and a man of integrity and devout Christian faith. What Eric Greiten’s did to John Brunner in that call is what psychology experts call “verbal abuse.”

Granted, Brunner is tough as a former Marine. One could dismiss the call as just a gentleman’s disagreement between a former Navy SEAL and Marine. What is different about this call is these two men are running for Governor. What the call displays about Greiten’s character−or lack of−is alarming.

After hearing that call, if Eric Greitens was an executive under my management, I would have censured or fired him. Others have been fired for far less, like an ill-advised Facebook post or unwise Twitter tweets. Former Governor Howard Dean blew his presidential chances after an out-of-control and high-pitched “Yea!” after winning the Iowa Caucuses in 2004. Greiten’s phone rant went on for 10 minutes.

If Greitens was a military officer under my command, I would have sought his demotion or reprimand for that call. If he would speak to my spouse, any of my children, a co-worker or anyone in my presence in that way, I would give him the strongest rebuke. If he did not apologize and did it again, I would possibly seek a restraining order against him on their behalf.

Greitens could dismiss the call and say he would never talk to a woman or anyone else that way, unless he was talking to a guy man-to-man. Talking to anyone that way when you want to be the chief executive and ambassador for the State of Missouri is inexcusable.

That was not the audio of a credible candidate for Governor. Every employee for the State of Missouri who could have him as a new boss in January−if he gets past the primary and general elections−should listen to the call. It sounds more like the casting audition of a wanna-be-actor reading a script while trying out for a part in a movie about a sociopathic psychopath.

To quote Navy SEALs, “This August, Anyone But Greitens.”

I would challenge any Republican primary voter considering voting for Eric Greitens to listen to the call. I hope all his donors and supporters listen too. His disrespectful lack of professionalism has no place in the Missouri Governor’s mansion or as the CEO of a state with a multi-billion-dollar budget and nearly 60,000 employees.

The sincerity of Eric Greiten’s newfound political identity as a Republican conservative, given his recent political past, is highly questionable as well. He appears to be a political opportunist playing the people of Missouri with money from out-of-state from liberal and questionable coffers.

If he is truly a lifelong Democrat who turned Republican and is now a sincere conservative convert, he should be given the benefit of the doubt over the coming years to prove it. For now, a guy who was going to run against Roy Blunt for the U.S. Senate just six years ago has no place on the ballot in November as a Republican. Neither does a man who failed to garner a pro-life endorsement and opposed a religious freedom amendment deserve to be the Republican nominee for governor.

Normally, no candidate running in a Republican primary with the history, record, liberal alliances and donor base Greitens has would ever have any chance of winning. It’s amazing what more than $10 million can buy and the false image it can create, combined with false attacks on opponents. Hopefully, Republican primary voters will make an educated choice for Governor on August 2nd and vote for a real Republican.

With three outstanding Republican candidates for Governor, now is not the time for Republican primary voters to hand the nomination to a man with a lifelong background as a liberal Democrat that continued until as recently as just a couple of years ago.

–By John Wright, Special to the Metro Voice