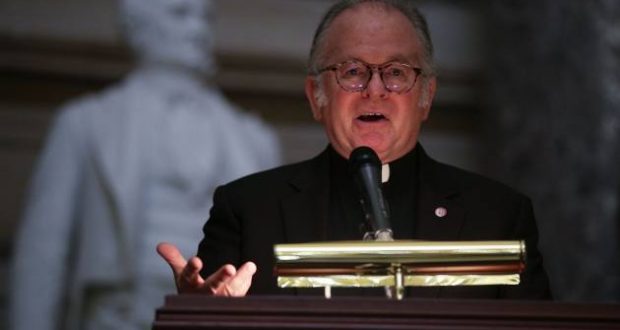 U.S. House Chaplain Father Pat Conroy, speaks during a memorial service at the National Statuary Hall of the Capitol in Washington.

A federal appeals court recently delivered a legal victory to House Chaplain Father Patrick Conroy, ruling that he could not be ordered to allow a self-described atheist to offer non-religious prayers to the House of Representatives.

The decision—a unanimous ruling by a three-judge panel on the U.S. Court of Appeals for the District of Columbia—stemmed from a case filed by Daniel Barker, a former minister who argued that the House violated the First Amendment when it rejected his request to give a secular invocation as a “guest chaplain.”

Barker spent nearly two decades as a pastor and missionary before he “lost faith in faith” and became an atheist. In his suit, he claimed Conroy “unconstitutionally excluded him” from the guest chaplain program because he is an atheist. Barker is now the co-president of the Freedom from Religion Foundation.

In a written court opinion posted April 19, Judge David S. Tatel clarified that Barker’s request to give secular prayers was denied because it broke the rules of the House, not because he was an atheist.

“Even though we accept as true Barker’s allegation that Conroy rejected him ‘because he is an atheist,’” Tatel wrote, “The House’s requirement that prayers must be religious nonetheless precludes Barker from doing the very thing he asks us to order Conroy to allow him to do: deliver a secular prayer.”

“We could not order Conroy to allow Barker to deliver a secular invocation because the House permissibly limits the opening prayer to religious prayer. Barker has therefore failed to state a claim for which relief can be granted.”

Conroy first rejected Barker’s application in 2015 to serve as a guest chaplain because he was “ordained in a denomination in which he no longer practices.” The court noted how Conroy later revised his explanation.

“But during the course of this litigation, Conroy has taken a different position: that Barker could not serve as a guest chaplain because he sought to give a secular prayer. More importantly, the House of Representatives itself, through House counsel, has now ratified that position,” the court said. “Both in briefing and at oral argument, House counsel represented to this court that the House interprets its rules to require ‘a religious invocation.’”

Debate on the issue began in 2015, when Rep. Mark Pocan (D-Wisc.) invited Barker to serve as a guest chaplain. The next year, Barker filed a suit when Republicans, under former Speaker Paul Ryan (R-Wisc.), took Conroy’s side.

In 2014, the Supreme Court upheld legislative prayer. At the time of the ruling, Sen. Marco Rubio (R-Fla.) praised the court’s decision.

“Unlike so many other countries around the world, America always has been a place where religion brings people together. In times of war and peace, tragedy and triumph, prayer has united us,” he wrote in a statement. “Prayer has inspired many of the great reforms that have strengthened and delivered on the promises of liberty made in 1776.”

“Legislative prayer, in particular, is a practice that goes back to the very Founders of the Republic,” he added. “It has enriched my career as a public servant, both in the Florida legislature and now in the U.S. Senate.”

Previous: Reader anticipation for ‘The Oracle’ by Jonathan Cahn
Next: Rare coin discovered in Israel by high school students