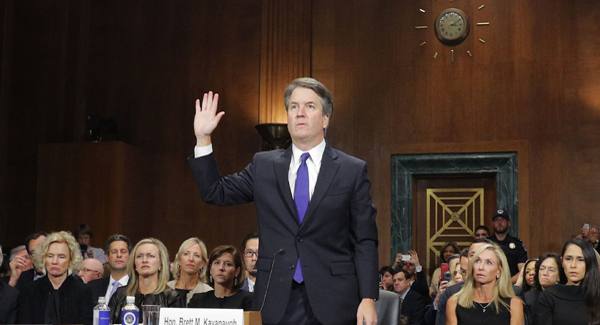 A recent poll found that 60 percent of Americans want nominee Brett Kavanaugh confirmed to the United States Supreme Court (SCOTUS) if the Federal Bureau of Investigation (FBI) dismisses the sexual misconduct allegations waged against him.

According to a weekend poll conducted by CAPS/Harris over the weekend, a good majority of Americans have confidence in the FBI that it will get to the bottom of the accusations made by three women against the beleaguered SCOTUS nominee, while most Republicans think he should be confirmed even without the FBI’s input.

“If the FBI finds no corroboration of the charges, 60 percent believe that Kavanaugh should then be confirmed,” The Hill reported from the CAPS/Harris poll. “GOP voters were ready for a vote now, and overwhelmingly back the confirmation without further delay.”

Get the facts, end the show

Regardless of their political persuasion, most American voters want to see an end to confirmation process that many believe has devolved into a “national disgrace” – with Republicans seeing it as little more than character assassination at the hands of Democrats desperate to do anything they can to oust Kavanaugh from the Supreme Court running and avoid a conservative leaning of the bench.

Instead of seeing more of the back-and-forth going on between politically motivated Democrats and Republicans, two out of three Americans are now rallying behind the idea that the FBI should have the final say in the controversial matter.

“Sen. Jeff Flake (R-Ariz.) – feeling rather directly the corrosive split within the nation – has the support of the country in insisting upon a brief and limited FBI investigation before the final vote,” The Hill’s Mark Penn pointed out. “Sixty-six (66) percent of Americans support that decision, and that includes 80 percent of Democrats, 69 percent of independents, but only 45 percent of Republicans.”

Americans are divided over the allegations, and less than half exclusively believe the accusations made by his first accuser, but most believe that both she and Kavanaugh are “credible.”

But Americans are still confused over the debate that has spurred a media frenzy, with slightly more now believing that Kavanaugh should not be confirmed.

“As of now – in the wake of the testimony – only 37 percent want Kavanaugh confirmed, but only 44 percent say he should not be confirmed,” Breitbart’s John Nolte informed. “Because ‘corroboration’ is the only standard a wide majority of Americans care about, if this FBI investigation clears him, a whopping 60 percent want Kavanaugh confirmed. Moreover, once those polled were informed ‘that the named witnesses deny any knowledge of the allegation, this shifts to 57 percent who favor confirmation.’ In other words, once voters know the full truth (the truth the establishment media are hiding from them), they overwhelmingly side with Kavanaugh – those who call for his confirmation jump from 37 percent to 57 percent.”

Regardless of their take, about seven out of 10 Americans see the confirmation hearings as an embarrassment to the country.

“Underlying this battle for the nomination is a political battle, and 69 percent agree with Kavanaugh’s pronouncement and Sen. Lindsey Graham’s (R-S.C.) statement that the proceedings have been a ‘national disgrace,’” Penn noted. “Sen. Diane Feinstein (D-Calif.) definitely is in the crosshairs, with 75 percent believing she should have turned over Ford’s letter months earlier so that this debacle might have been avoided. Graham has raised some serious questions about the actions of Ford’s lawyers and Feinstein’s legal referral, too.”

As Democrats and Republicans alike are doing their best to condemn the other side, both parties are reportedly hurting their own reputations as the conjecture continues to go back and forth, but the battle is expected to draw more voters from both sides to the ballot box, come November.

“No one, clearly, is winning the partisan battle today – if anything, both parties are losing,” Penn stressed. “Men, by 62 percent, say Democrats are to blame while women, by 57 percent, say Republicans are to blame for the partisanship they are seeing, and, without doubt, this fight is likely to energize turnout in the midterms – with 45 percent saying they are more likely to vote as a result of the confirmation battle. So far, Democrats have a slight edge in building voter energy.”

The party lines have been clearly drawn in the debate.

“Also – without question – attitudes towards confirmation are divided by party, with 72 percent of Republicans favoring immediate confirmation; that figure rises to 86 percent if there is a favorable FBI report. Democrats are dug in as well and – even after an FBI investigation that would fail to corroborate Ford – 60 percent still would oppose Kavanaugh. It’s the independents who can be swung over by the added element of a supplemental FBI background check.

Overall, however, when all is said and done – FBI investigation or not – more than six out of 10 Americans expect Kavanaugh to be sitting on the SCOTUS bench in the near future.

“A full 63 percent believe Kavanaugh will eventually be cleared and confirmed,” Nolte divulged from the poll.

Previous: Dozens of kids at Bible camp among earthquake dead
Next: Kander drops out of mayor’s race, cites mental health