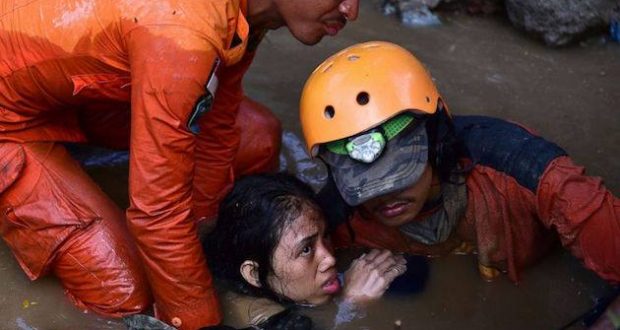 Fewer and fewer survivors are being located as time runs out for their rescue.

Dozens of kids at Bible camp among earthquake dead

The number of dead from the massive Indonesian earthquake and tsunami has now reached at least 1,234 and it’s expected to rise into the thousands as rescue crews explore new hard-hit areas.

The quake was an intense magnitude 7.5, and the tsunami measured roughly 20 feet high in some areas. The images and stories pouring in from Indonesia are heartbreaking.

Officials say at least 34 of those killed were children who were attending a Christian Bible camp. Rescue workers said a mudslide caused by the earthquake engulfed the church.

Groups like the Red Cross are struggling to help victims, but it’s a race against the clock as they’re running out of time to reach people who may still be trapped beneath rubble.

Officials say at least 800 others have been injured across the region. Communities like Sigi and Balaroa have not been counted yet, so the death and injury tolls are expected to keep rising.

The quake and tsunami struck a week ago, hitting the city of Palu and nearby areas on Indonesia’s central Sulawesi island. Here’s some stunning footage of the tsunami as it hit.

The Indonesian islands sit along the “Ring of Fire,” which is a very active fault line the runs up and down the Pacific Basin and stretches all the way across the Pacific Ocean to South America and then all the way up to Alaska. There are ongoing quakes and volcanic eruptions along that Ring of Fire, including a deadly quake that killed 505 people on the Indonesian island of Lombok in August.

The most infamous event in recent history in that region was the December 2004 tsunami from a massive magnitude 9.1 earthquake off Sumatra Island that left 230,000 people dead in a dozen countries.

The island that was hit hardest by this latest tsunami has a history of religious tension between Muslims and Christians, with violent riots erupting not far from Palu, two decades ago. Indonesia is the world’s most populous Muslim country.