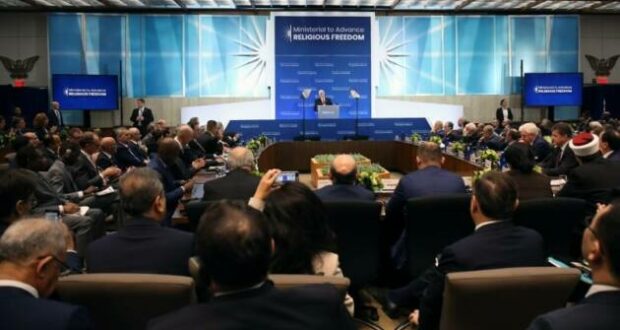 Sam Brownback concluded a conference on international religious freedom in the nation’s capital on July 15, after bringing together an array of faith and political leaders with the goal of tackling discrimination around the globe.

The three-day IRF Summit 2021 “is about relationship-building,” Brownback told Religion News Service. “We really need to have civil society and religious leaders building relationships to stand up for each other’s religious freedom.”

Brownback, former U.S. ambassador for international religious freedom in the Trump administration, touted the conference’s diverse group of presenters, which includes House Speaker Nancy Pelosi (via video), and sponsors, such as the National Council of Churches and HIAS, and a Jewish refugee group. Sen. Chris Coons of Delaware and U.S. Rep. Henry Cuellar of Texas, both Democrats, are listed with two Republicans, Sen. James Lankford of Oklahoma and U.S. Rep. Chris Smith of New Jersey, as honorary congressional co-chairs of the privately funded event.

Brownback, who received praise for his former work, is co-chair of the conference with former U.S. Commission on International Religious Freedom chair Katrina Lantos Swett, said he hoped to created a bipartisan, multifaith coalition to champion what the summit website described as the “cause of religious freedom around the world.”

To achieve a bipartisan presence at the conference, Brownback — whose former ambassador post has still not been filled by the Biden administration — gave the meeting an international focus. “We didn’t pick domestic because we’ve got a lot more division on domestic religious freedom,” he said. “That was intentional at the outset.”

That narrower focus still allows for a broad spectrum of concerns, he said, such as China’s genocide against Uyghur Muslims, the rise of Hindu nationalism, the persecution of religious minorities in the Middle East and attacks on Christians by Muslim groups across Africa.

The conference recalled the summits on international freedom held at the State Department during Brownback’s tenure as ambassador-at-large under the direction of former Secretary of State Mike Pompeo, who is also a speaker this week. And despite the range of speakers, the logos of conservative groups such as Alliance Defending Freedom and the Family Research Council, both supporters of the conference, are prominently displayed on the website.

Brownback, a former Kansas governor, said his experience at the State Department’s “ministerials” on religious freedom during his ambassadorial tenure showed him the common interest Republicans and Democrats had in international religious freedom in an era otherwise defined by partisan rancor.

“In 2019, we probably held the only event in America where Nancy Pelosi and Mike Pompeo both got a standing ovation,” he said.

Brownback said he remains optimistic that support for international religious freedom can be bipartisan, so long as such alliances receive appropriate “care and nurturing.” He praised the Biden administration for taking a hard-line position against China’s treatment of Uyghurs and expressed hope that this week’s conference can further encourage the foreign policy community to take religion seriously.

“I think it’s a blind spot, particularly for foreign policy experts in the West, not to see the real need to engage religious leaders,” he said.

By way of example, he pointed to the success of the Abraham Accords, a multinational peace agreement in which Morocco, Bahrain, the United Arab Emirates and the Republic of Sudan normalized relationships with Israel. The accords are a rare example of a Trump policy achievement embraced by the current administration, and Brownback argued that the title — a reference to the shared religious connection to the figure of Abraham found in the scriptures of Muslims, Jews and Christians — recognized an undeniable “religious aspect” of foreign policy.

“You’ve got to engage the religious leaders to get breakthroughs like that, because they’re the ones that have a lot more credibility, many times, with the public,” he said.

While Brownback said it’s too early to give President Joe Biden an overall grade on religious freedom, he expressed frustration with the president’s decision to “walk away” from an “Unalienable Rights Commission” created by Pompeo, which argued that freedom of religion and right to property were the two most important rights.

Brownback added that he hopes participants in this week’s summit will recognize the power of defending the free expression of faith, and warned that failing to do so could have dire consequences.

“Religion can be manipulated by enterprising politicians or clerics alike,” he said. “It’s not something you want to see abused, and we have seen it abused in very deadly ways.”