Home / News / Is Europe heading towards war with Russia? 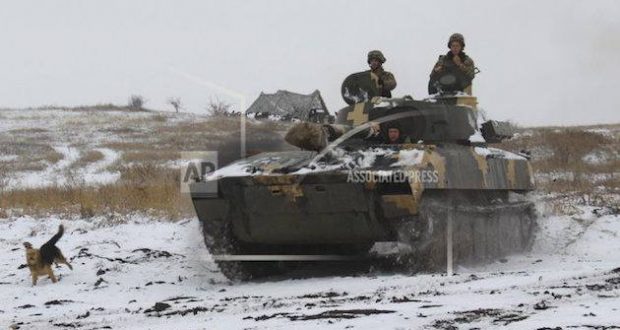 Ukrainian military units are being positioned area of possible war with Russia.

Is Europe heading towards war with Russia?

Ukraine has instituted martial law and is calling up reserve forces in response to aggression from Russia. Tensions are at a breaking point between the nation and Russia after Russian ships fired on and seized two of their artillery ships last Sunday in the Black Sea and experts fear the largest war since WWII could break out on the continent.

Six Ukrainian seamen were hurt in the naval incident which took place near Crimea, a Ukrainian province which Russia seized back in 2014.

This week, US Ambassador to the UN Nikki Haley spoke out against Russia’s  actions at an emergency UN meeting saying, “The United States will continue to stand with the Ukraine against the Russian aggression.”

President Trump cancelled an expected meeting with Russian leader Vladimir Putin at the G-20 summit because Russia had not complied with demands to return the seized ships and sailors.

Haley, echoing President Trump’s statements, said that the United States would welcome a normal relationship with Russia but she called on Russia to “immediately cease its unlawful conduct” in the Black Sea near Crimea.

Russia currently occupies  portions of East Ukraine after the Ukrainian civil war split off Russian speaking areas including the Crimea. The Obama administration, along with the EU, failed to honor historic agreements made with Ukraine that promised military assistance in the face of Russian aggression if Ukraine voluntarily gave up its nuclear weapons at the end of the Cold War. Ukraine gave up its weapons but received no help beyond sanctions after Russia invaded the nation and tore away major swaths of land and  incorporated them into Russia.

Ukraine is facing a presidential election next year and Russia has historically manipulated Ukrainian elections and has also fomented a violent uprising in eastern Ukraine.

European leaders are holding their breath that the standoff will lead to full-out war between the two nations drawing in NATO though Ukraine is not currently a member.