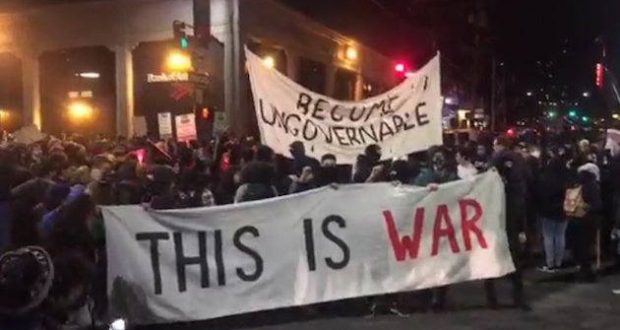 Leftwing protestors have posted their plans “to make sure Trump leaves the White House” by any means necessary should he lose next week’s election. “The Federalist” and Forbes have found recently discovered posts from Shut Down DC and its allies organizing protests.

“We can’t anticipate exactly how Trump and his enablers will try to attack democracy (although we have been gaming out a number of different scenarios), but we know that the stakes are too high to sit on the sidelines and wait. That’s why we’re making plans to be in the streets before the polls even close, ready to adapt and respond to whatever comes our way,” the group posted on its website.

The webpage claims, “Trump has shown that he will stop at nothing to maintain his grip on power. Trump will not leave office without mass mobilization and direct action.”

The Shut Down DC group is linked to earlier protests at the homes of Trump administration officials, according to “The Federalist.” On the webpage, they tell their supporters to come to the Black Lives Matter Plaza. The plaza was the scene of rioting over the summer and the resulting damage done to St. John’s Church building just down the street from the White House. 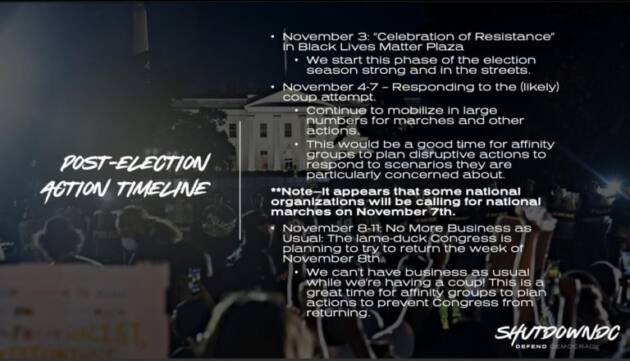 “On Election Day, when you’re done voting, doing election protection or getting out the vote, come join us at Black Lives Matter Plaza. We’re inviting everybody who agrees with these organizing principles to work together to make this uprising happen. We’re going to make sure Trump leaves. From election night on, as the situation changes and evolves we all work together to make that happen,” they told their supporters on the webpage.

The group also tells its followers that if they are not in Washington, “Organize in your community! Find out where the votes will be counted where you live. Make a plan with others to get there and stay until all the votes are counted. And come up with a plan to create serious disruption if Trump really tries to steal the election! Be ready to block a highway (or all the highways in your town), shut down a port, occupy your state capitol, do whatever it takes! We hope to be able to offer training and support to groups outside DC that share our principles.”

Some cities have already announced plans to call out the National Guard for election night and the days following. Texas Gov. Greg Abbott announced that five Texas cities will have Guard protection on election day in response to possible protests.

Forbes Magazine reported on dry-run scenario organized by never-Trump politicians and academics named the Integrity Transition Project. While the group assumed the violence would be at the hands of Trump voters, Forbes reported:  “The TIP report predicted that it would be Trump and his supporters who would resort to violence. This may well be a classic case of a phenomenon called the Mirror-Image Fallacy in which analysts project their own attitudes and bias onto to their opponents. In fact, on Page 9 of the TIP report they note, “During TIP’s exercises, Team Biden almost always called for and relied on mass protests… participants in the exercise noted that racial justice activists and others will likely act independently of the Biden campaign…” This is a candid admission of the eventuality of the Biden campaign encouraging street demonstrations that might escalate into violence.