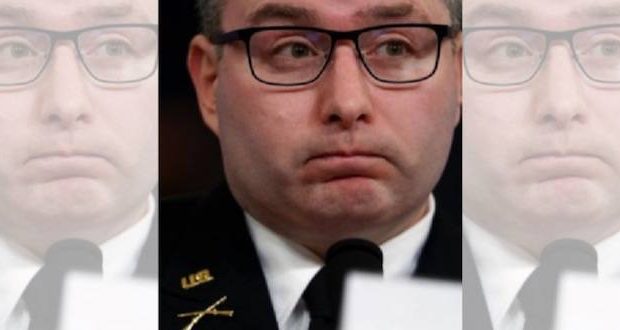 Lt. Col Alexander Vindman, who gave contradictory testimony in the House impeachment hearings of President Trump, has been escorted off the grounds of the White House this afternoon.

Vindman had served in a rotating position on the National Security Council and described himself as a Ukraine expert on the council. Vindman’s twin brother, Yevgeny, was also fired, according to his attorney David Pressman.

News — Lt. Col. Vindman was just escorted out of the White House by security and told his services were no longer needed.

When reached for comment about Vindman’s dismissal, an NSC representative stated, “We do not comment on personnel matters.”

There were reports on Thursday and Friday that the White House was considering ousting Vindman. As he was departing for North Carolina earlier on Friday, Trump told reporters he was unhappy with Vindman and signaled that he was on his way out.

Democrats were quick to cry foul.

“This is shameful of course. But this is also what we should now expect from an impeached president whose party has decided he is above the law and accountable to no one,” Rep. Eliot Engel, chairman of the House Foreign Affairs Committee, said in a statement.

Vindman’s testimony was grilled as self-serving and even partially fabricated. He faced harsh blowback from the president and his supporters in Congress after he testified against Trump behind closed doors and later in public. Among other things, he was accused of being anti-Trump and faced racist allegations of dual loyalty to Ukraine.

Update: It was in fact epic.

Vindman’s testimony had been contradicted by other Cabinet officers including by  Rick Perry, one of the “three amigos” who were special envoys to Ukraine in July.

Vindman and Williams are turning out to be horrible witnesses for the Dems.

This is all falling apart, and even lefty Twitter isn't defending it.#ImpeachmentHearings

Vindman admitted under oath that he made up elements of President Trump’s call with Ukranian President Volodymyr Zelensky in his official summary.

Prior to the call, Vindman included a discussion about corruption in the talking points provided to the president but Trump did not use them in the call.

The summary Vindman wrote after the call read included his corruption talking points that were never discussed.

Political observers said that, by adding those talking points, it would make the call seem more “ominous.” Vindman’s plan, they said, had been exposed after Trump released the transcript of the call.