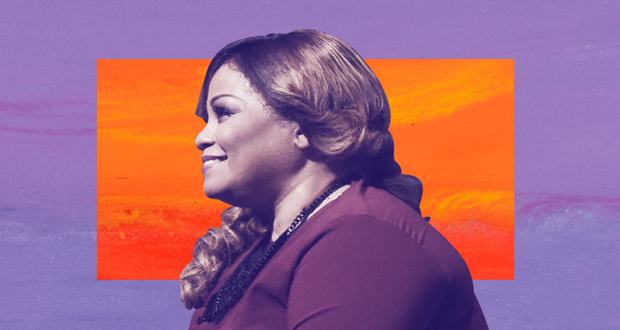 Melanie Few is a marketing executive with a huge vision — for 20 years, she has merged faith and football by producing the Super Bowl Gospel Celebration, which brings together some of the biggest names in football, church, hip-hop, rhythm and blues, and film.

“Faith and football are a natural combination,” Few said. “When you look at other sports, football players are much more vocal about their faith. I have learned that the culture of football is that of family and it is values-driven. Even when they are in Pop Warner, players are brought up doing team prayer and chanting words of affirmation before games. They are brought up that way, and it may be why football is so faith-oriented.”

The sold-out 20th anniversary event was held at Atlanta Symphony Hall on Jan. 31. It will air on BET on Feb. 2, the day before the game. Few is an Atlanta native, so it is extra special that the 2019 Super Bowl will be in her hometown. She is a member of New Hope African Methodist Episcopal Church in Atlanta’s Buckhead neighborhood.

Before starting the gospel event, Few had attended a number of Super Bowls as a fan with friends and professional acquaintances. It dawned on her that of the many events held leading up to the big game, not one of them was faith-based. This was something that she believed needed to change.

She pitched the idea of a nonprofit Super Bowl week gospel concert for seven years before she received support.

“Gene Upshaw, former NFL player and former head of the NFL Players Association, was interested. But he issued a challenge,” Few said. “He said if I could get Gladys Knight to perform, then he would underwrite it. He underestimated me. … He didn’t know that, if necessary, Gladys and I would ride in on the midnight train together to make this show happen.”

The first Super Bowl Gospel Celebration was held the next year, featuring Knight, powerhouse gospel music group Fred Hammond & Radical for Christ, and the duo Dawkins & Dawkins. In 2001, the event was sanctioned by the NFL and became the organization’s only official faith-based event.

BET began broadcasting the event in 2015. According to Nielsen, it was the highest gospel/religious program on broadcast television for the 2017-18 period.

At the 2018 event, Snoop Dogg delivered the first televised performance of music from his gospel album Snoop Dogg Presents Bible of Love. Seattle Seahawks quarterback Russell Wilson was honored with the Faith in Action Award, which is given to players who show their faith through their actions year-round. Arizona Cardinals wide receiver Larry Fitzgerald received the Lifetime Achievement Award for service to football and the NFL. Over the past two decades, the Lifetime Achievement Award has been handed out five times. The other recipients were Troy Vincent, Ray Lewis, Tony Dungy and Tim Brown.

“For me, my faith has supported me altogether as an entrepreneur, and especially with this endeavor. If I were not a woman of faith, I could not and would not have made it this far.”

She believes there is no way she would have been able to maintain producing the event year after year without “a rock-steady and rock-solid relationship with God.” That and the values and support of her parents sustain her.

Previous: Democrats propose massive 80% tax rate, policies like Venezuela’s
Next: FROM THE CHEAP SEATS – Super Let-Down for the Super Bowl