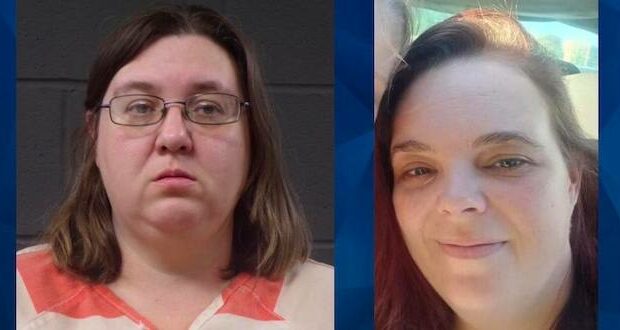 A pregnant Arkansas woman who thought she was going to a job interview was instead killed in Missouri by a woman who wanted to claim her baby, federal authorities said Friday. The baby was also found dead.

The U.S. Attorney’s Office in Missouri said Amber Waterman and Jamie Waterman, both 42, of Pineville, Missouri, were charged in the death of Ashley Bush, 33, of Siloam Springs, Arkansas.

The body of Bush’s baby, Valkyrie Grace Willis, was found Wednesday, and Bush’s body was found Thursday in separate locations in Missouri, according to authorities in Benton County, Arkansas.

Bush had three other children, ages 8, 7, and 2, and was engaged to be married.

They remain in federal custody pending detention hearings, which have not been scheduled. Federal court records do not name attorneys representing the couple.

According to a federal court affidavit, Amber Waterman called herself “Lucy” online in order to meet Bush. She allegedly persuaded Bush that she would give her a ride to a job interview. Sometime between Monday and Wednesday, Waterman drove Bush from Maysville, Arkansas, to Pineville, Missouri, resulting in her death, prosecutors said.

The federal complaint alleges Jamie Waterman helped his wife hide Bush’s body in a tarp, burn it in a fire pit behind their home and then dispose of the remains.

Ashley Bush was reported missing on Monday. Her fiancé told law enforcement that the couple met a woman they knew as “Lucy,” who said she would drive Bush to meet her supervisor at a Bentonville, Arkansas, company.

The fiancé said that later he was waiting to pick up Bush when she and “Lucy” drove by in a pickup truck and didn’t stop. He later found Bush’s phone on the side of the highway.

Benton County sheriff detectives later found a Facebook post of “Lucy” offering to give baby items to any moms who needed them.

Previous: “Jesus Revolution” will be in theaters in February with story of revival and hope
Next: Conservative candidates rally at the Kansas State Capitol