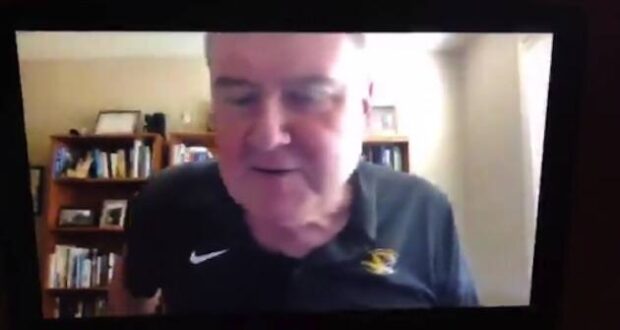 Professor Poor in his exchange with online studentrs.

A business professor at the University of Missouri said he was relieved of teaching duties because of a joke he made to a student in Wuhan, China, in an online class, Voice of America reported.

Joel Poor, an associate teaching professor at the university’s Trulaske College of Business, sent a note to his students on Monday, saying, “Today I was relieved of teaching duties. I apologize for any disruption this might cause you.” However, Christian Basi, a university spokesman, said the next day that Poor was not fired and remains an employee, but has been assigned to other duties.

“The Columbia Missourian” reported that Poor was leading an online marketing class. In a video posted on Twitter, he asked if any students were from outside the United States. One student said he was from China. “I’ve heard of China,” Poor says, asking where the student was from in China.

“Wuhan? Well, let me get my mask on,” Poor says with a slight laugh.

Critics on social media were quick to call for his firing.

Watch the entire video @Mizzou you shouldn’t have acted before getting all the information #freejoelpoor pic.twitter.com/m0pOnwlWAN

Poor later apologized in an email and said the reference was meant as a joke. But many students replied to the tweet that they found the comment racist and xenophobic.

Basi said the comment was reported to the university’s Office of Civil Rights and Title IX for investigation. He said Poor “will be provided due process.” Because it is a personnel issue, no further details could be provided, he said.

Following the backlash on Twitter, Poor wrote in a later email that the comment, which was in reference to Wuhan being the origin of COVID-19, was a joke. “To anyone who was offended by my comments, I sincerely apologize,” Poor said. “I have nothing but respect and love for the Chinese people and especially my students from China.”

Other MU students and alum were quick to respond in defense of the professor with some pointing out that in the exchange, the professor offered lodging to any student from China caught without a place to stay.

A lame misplaced dad joke being deemed somehow more important than this guy literally offering shelter to a student he wants to make sure is okay is peak 2020. Very dumb.

The University began in-person classes on Monday, Aug. 24. University officials say they are monitoring the covid situation closely and be ready to make any adjustments, including moving to remote or other models for delivering instruction, should that become necessary.

Previous: Businesses begin fleeing Portland as riots continue
Next: Apps that might be worth a download for yourself or family