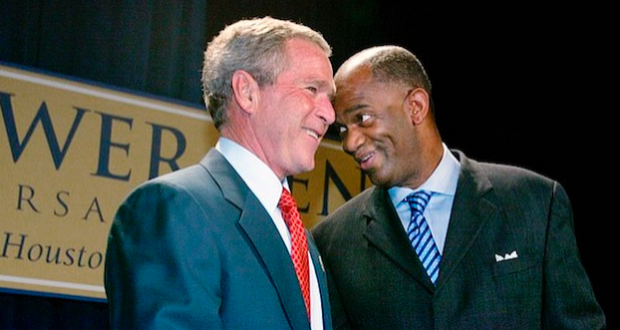 Houston Pastor Kirbyjon Caldwell, who was a close and prominent advisor to President George W. Bush, is going to prison for his role in a multimillion-dollar investment scam. In addition to his six-year sentence, he faces an additional year of supervised probation and must pay more than $3.5 million in restitution.

As the leader of an African-American congregation, Caldwell helped Bush as he sought to appeal to Black voters and delivered the benediction at Bush’s second inauguration.

“The defendants in this case abused the trust that the victims had placed in them,” acting U.S. Attorney Van Hook said. “This defendant used his status as the pastor of a megachurch to help convince the many victim investors that they were making a legitimate investment, but instead he took their hard-earned money from them and used it for his own personal gain. This office will continue to investigate and prosecute those who scheme and prey upon the elderly and others.”

Caldwell, 67, who was indicted in 2018 for defrauding investors — including elderly members of his Windsor Village United Methodist Church — of more than $1 million, previously maintained his innocence as his codefendant, Gregory Alan Smith, pleaded guilty to wire fraud.

Caldwell and Smith, who is an investment advisor based in Shreveport, La., both were charged with 13 counts, including conspiracy to commit money laundering when they raised around $3.5 million in historic Chinese bonds from 29 investors between 2013 and 2014.

Potential investors were told that they would obtain partial ownership interest in the bonds and that they would receive exponential returns on their investments in a short period of time. Caldwell and Smith neglected to tell these individuals that the bonds, issued by the former Republic of China before losing power to the communist government in 1949, held no value. The bonds were considered by the Securities and Exchange Commission to be mere collectibles, with no value outside of the memorabilia market.

After hearing the pitch, investors signed up and were provided a participation agreement indicating that if the sale of the bonds failed to occur within a certain number of days, the invested funds would be returned within a specific time. They were instructed to wire funds to various bank accounts held by or controlled by Caldwell. Approximately $3.5 million was “invested” in the scheme in 2013 and 2014.

Smith, Caldwell and others later divided up the funds, with Caldwell personally receiving approximately $900,000. Caldwell used a portion of the funds to pay down debt, including personal loans, mortgages and credit cards to maintain his lifestyle, while investors were told their funds were used to purchase bonds and pay for expenses incurred from selling or redeeming the bonds.

The announcement has put former President Bush in an awkward position after he regularly criticized President Donald Trump over financial dealings. Trump’s business dealings to date have been found to be legal by several courts and the federal agency that oversees compliance by federal officials.  It is not known if Bush lost money in the scam. He has not commented on the sentencing.

Previous: National March for Life in DC canceled, will now be virtual
Next: Gov. Parson proclaims January 24-30 as School Choice Week in Missouri