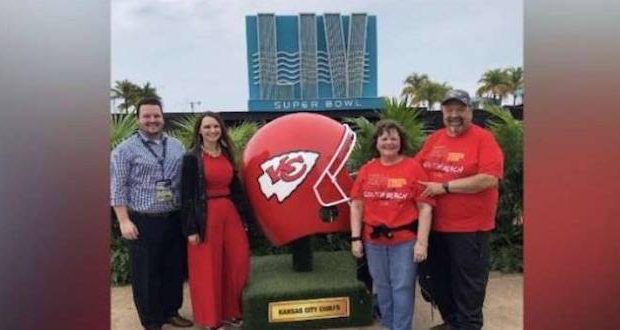 Provided by the O'Donnell family.

Pastor Michael O’Donnell Sr. of Grace Baptist Church in Wichita nearly lived to see the Chiefs win the Super Bowl. He died in his sleep just hours after posting a photo of himself and his family posing with the Vince Lombardi Trophy in Miami.

“Here we are with the trophy that’s going back to Kansas City!” he posted on Saturday night, according to the Wichita Eagle. Pastor O’Donnell’s family revealed their sudden heartbreak after tragedy struck.

“I’m absolutely heartbroken to share that my dad, my biggest supporter and the greatest man I know passed away unexpectedly this morning,” his son Michael O’Donnell said. “He was in Miami getting ready for the Super Bowl to watch his beloved Chiefs. Our family is absolutely devastated and would appreciate your prayers. We know with certainty he is with our Savior.”

He recalled in a television interview how his father had been waiting for his team to shine in the Super Bowl since he was a child.

“My dad grew up in the era of Len Dawson and the grandeur of the Chiefs franchise and had always had this desire that he couldn’t go as a kid,” O’Donnell said. “It’s just so sad and ironic that he goes and the day of, he doesn’t wake up this morning.”

Pastor O’Donnell was affectionately known in his community as “Pastor Mike” and enjoyed calling into radio sports talk shows, the network reported. His son said along with his love for his favorite NFL team, Pastor O’Donnell’s legacy is defined by his passion for God and his faith.