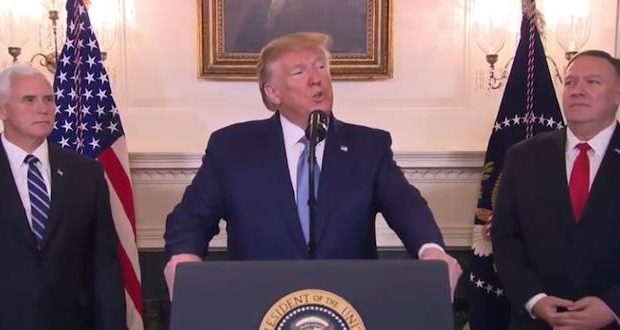 President Trump flanked by Vice President Mike Pence and Secretary of State Mike Pompeo as he announces the U.S. will not be dragged into another Middle East war.

This December, Speaker Pelosi led most of her party in passing very partisan articles of impeachment. The House rushed through the process for Trump  to be impeached because the danger was so great that they needed to expedite everything so that they can rid this country of the duly elected by the people President Trump. In the words of House Majority Leader Hoyer (Dem, MD) on December 5, 2019, “This is a process that has gone on for over two and a half years.”

After over two and a half years of trying to get Trump impeached, the House only accused him of two crimes which legally speaking are not even crimes.

Democrats changed the rules on what a whistleblower can be by saying someone with second hand information can become a whistleblower. The whistleblower never heard any part of any conversation that Trump had with a foreign power. He heard it from someone. If you ever played telephone, you know why this kind of information is unreliable. In fact, any lawyer worth his salt would object to this kind of testimony as hearsay; and every honest judge would sustain it.

It seems that the Democrats ran with Adam Schiff’s version of the phone call (a fictionalized account in which Trump demanded Ukraine to investigate Hunter Biden and the people who wiped Hillary’s email servers) not bothering with the transcript that Donald Trump released. From there, the Democrats held closed hearing where no Republicans were allowed to attend. Then came the circus of deep-staters who felt unappreciated by Trump and his administration in very dull and very inadmissible in a court of law testimony on live television.

Trump had a conversation with the President of Ukraine, a country who has suffered from a history of corrupt politicians. Trump asked that they enforced their laws according to our treaty and hunt down this corruption. The fact that part of this corruption leads to Hunter Biden as well as Hillary Clinton and Barak Obama only lies with those who actually committed crimes. Remember, Joe Biden openly bragged on camera that he pressured Ukraine to fire the lawyer who was investigating Hunter Biden for his crimes in that country and to drop all charges; or they would get no aide from Obama. Ukraine lost oil rich Crimea to Obama’s good friend, Russia, do to America not giving the promised aide in their time of trouble.

Trump never withheld aide to Ukraine, but Obama did. By the way, the lawyer probing dishonorably-discharged Hunter Biden and his unearned six-figure salary with Ukrainian Oil was fired and the investigation was dropped under the Obama administration. Who are the crooks here? By the way, quid pro quo in dealing with other nations is not a crime except in the way the Obama administration handled the Ukraine according to Joe Biden.

The second article of impeachment is obstruction of Congress. Every president of the United States is guilty of this. If this is a crime, all presidents should be impeached; but it is not. The Obama administration sold guns to the Mexican Cartel in hopes of those guns crossing the border and killing Americans so that they could pass stricter gun control laws. Congress investigated. Obama used Executive Privilege which ended the probe into Operation Fast and Furious. The POTUS answers to the American People not Congress.

In fact, it can be argued that Congress has obstructed Trump since his inauguration. This is where Hoyer’s two-and-a-half year admission is so important. Congress has been trying to trump up charges against the President since he was elected.

With the illegal FISA warrants gained by abuses of power by the FBI who spied on Trump throughout much of his candidacy, much of Congress made up of Democrats and Never Trump Republicans dragged their feet in doing their jobs in the hopes that Trump would resign, or they actually found a crime they could impeach him with. They placed their hopes on Mueller who found nothing, not even evidence of a crime. Most of the indictments they got were process crimes which with at any other time would never have been pursued nor prosecuted. The other indictments were on foreign companies which were never going to be prosecuted.

The impeachment articles of Donald Trump should never have passed the judiciary committee let alone the House floor. No crime has been committed, unlike Pedophile Airline alumni Bill Clinton. Clinton lied under oath (am impeachable offense). He also took advantage of a few women which Congress would never impeach him for.

As of this date, Trump has still not been convicted. The future may bring exoneration or further corruption of our Constitution by our corrupt politicians in Washington, who are trying to make a message loud and clear that they want no outsiders in power in the Capitol. The message is not just for Donald Trump. It is for every American who voted for him.

They want everyone to know they have the power and will not relinquish it easily to the American people. The American people tried to trump the swamp with Donald Trump. The question is impeach or Trump? You tell me.

Previous: Uganda may be next to open Jerusalem embassy
Next: Popular Wichita pastor dies soon after social media post at Super Bowl 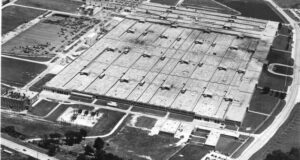 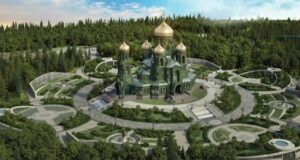 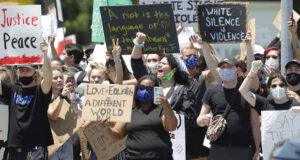 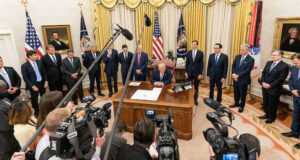