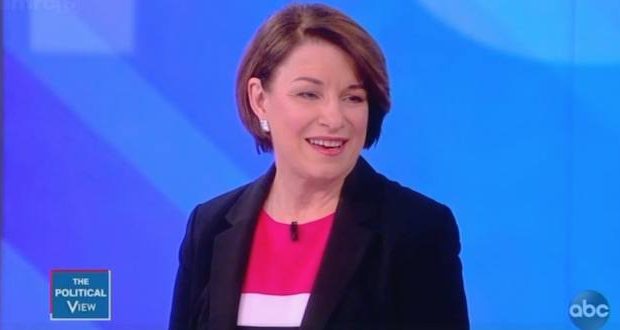 Democrat presidential candidate Amy Klobuchar is not pro-life, but she is the only candidate in the field who doesn’t reject people who are. The Minnesota senator said this week that her party should be open to pro-life voters.

Klobuchar first gained attention for the issue after fellow competitor Sen. Bernie Sanders (I-Vt.) said it is “absolutely essential” for Democrats to be pro-abortion, echoing the words of Democratic National Committee Chairman Tom Perez, who made clear in 2017 that pro-life Democrats are not welcome in the party.

Pete Buttigieg, the former mayor of South Bend, Indiana, stated in a town hall meeting last week that he would not change the Democrat party platform to include an openess to pro-life Democrats. His answer came in response to a woman in the audience who asked if there was room in the party for a pro-life Democrat like her.

Klobuchar repeated her position during an appearance on ABC’s “The View,” when co-host Meghan McCain asked the politician if it’s accurate to say she believes “there’s room for pro-life people” in the Democratic Party. After first confirming her pro-abortion bona fides, Klobuchar said she is open to welcoming pro-life voters into the fold.

READ: Buttigieg doubles down on support for infanticide

“I have always been pro-choice, but I believe we’re a big-tent party, and there are pro-life Democrats and they are part of our party, and we need to build a big tent,” she said. “I think we need to bring people in instead of shutting them out, and that also includes independents right here in New Hampshire as well as moderate Republicans.”

VIDEO: Klobuchar on The View

Last year Jacob Lupfer, lead strategist for the Pro-Life Democratic Candidate PAC, a movement devoted to drafting an anti-abortion presidential candidate on the left, spoke about the issue. Understanding how difficult it would be to mainstream such a candidate, Lupfer said it’s important to start a conversation about “protecting the vulnerable, which is a progressive value” and “should include the unborn.”

After hearing Klobuchar’s comments this week, Lupfer urged the candidate “to get more specific about which abortion restrictions she would actually support,” if any. He suggested she throw her weight behind the Born-Alive Abortion Survivors Protection Act. Such a bill should be “easy” for Klobuchar to support, “because it doesn’t infringe upon abortion rights at all,” Lupfer explained.

The legislation, which is under consideration by the Senate Judiciary Committee, would require doctors to provide medical care to infants who survive attempted abortion procedures.