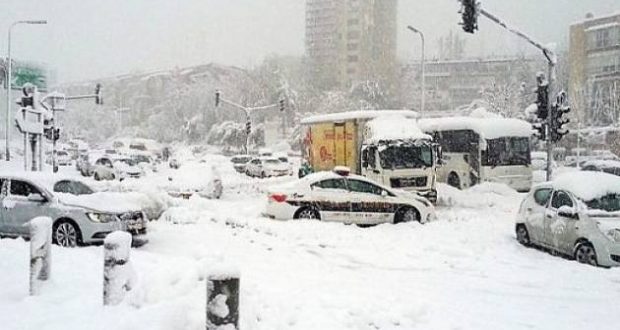 Stranded vehicles at the entrance to Jerusalem December 13, 2013.

“The Jerusalem municipality is completing its preparations for the possibility of snow,” with the various departments “prepared to handle every scenario,” Jerusalem Mayor Moshe Lion said.

“Along with the celebration that we’re hoping for, the snow also requires the personal preparation of residents, who are required to act responsibly and to obey the instructions of the municipality and the security forces,” he said in a statement.

Israel’s national weather service said snow is expected to start falling Wednesday in the northern mountains and by the afternoon is expected to spread to the peaks of central mountains, including Jerusalem. 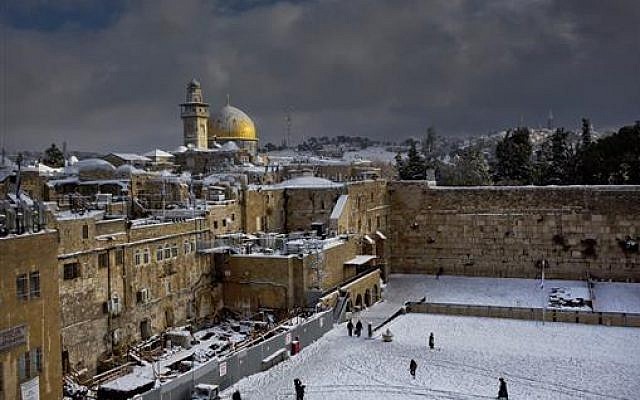 The Western Wall, right, and the gilded Dome of the Rock, among the holiest sites for Jews and Muslims, are covered in snow, Dec. 13, 2013. (Dusan Vranic)

The city said it has prepared some 150 snowplows, tractors, salt dispensers and engineering tools to help clear snow on its main roads and has 250 tons of salt on hand.

Schools in Jerusalem were ordered to close by 3 p.m. because of the possible snow, while other were to close by 1:30 p.m.

Israel’s central mountainous region, including Jerusalem, gets snowfall every few years. In 2013, a major blizzard knocked out power to several neighborhoods after blanketing the city with up to 30 centimeters (one foot) of snow. That same storm socked higher elevations south of the city with up to 90 centimeters (three feet) of snow in what was deemed a once-in-a-century event.

However, eastern Mediterranean weather is fickle, and predictions of winter wonderlands often don’t pan out.

“There is a 20 percent chance of several centimeters of snow in Jerusalem,” said Dr. Barry Lynn, a meteorology professor at Jerusalem’s Hebrew University who also runs a weather forecasting service. “Currently, though, our highest resolution forecast … does not show an accumulation of snow in Jerusalem.”

“This could change with the next update (Tuesday evening), as the synoptic conditions are more favorable for snow in Jerusalem,” Lynn added.