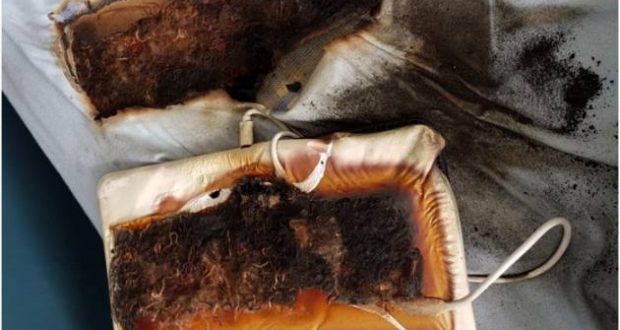 A picture of a melted and burned tablet and mattress, which occurred when the device was left plugged in for over 24 hours, according to Staffordshire Fire and Rescue Service, on June 19, 2019

An 11-year-old British boy had a “lucky escape” when a tablet burned through his mattress down to the springs, but never developed into a full fire as it continued to smolder as he slept inches away.

According to firefighters, the tablet—which had been plugged in since the previous evening—was connected to a genuine charger, but became hot as it lay on his bed on the night of June 19.

“Fortunately for the family, it did not develop into a full fire but had smoldered throughout the night,” said a statement from the Staffordshire Fire and Rescue Service. “When the boy awoke the next morning, he discovered the hole in his bed, and his room was covered in a layer of black soot.”

The fire service provided a picture of the tablet, which was blackened and melted in an oblong area on one side. The cable appeared to have melted into the rest of the blackened mass of the device.

The device appeared to carry Samsung branding. Samsung has been contacted for comment but has not responded at the time of writing.

The fire service did not directly reveal the brand or name of the device but said that according to the family, it had been purchased brand new four years ago.

The fire service said it had burned through to the mattress springs.

The boy’s father called firefighters when he discovered the device in the morning.

“This family has been greatly shocked by what has happened and it serves as a stark reminder not to leave items charging on materials that could catch fire when hot,”  said Staffordshire firefighter Brad Robins.

“Always place phones and tablets on to a safe surface when charging. Make sure you buy genuine chargers for your items and follow the manufacturer’s instructions. Be sure to register your product in case there is a product recall.”

But the potential dangers of smart devices left plugged in overnight—often near or in bed—isn’t limited to the device getting too hot if plugged into the wrong cables.

With phone ownership rocketing over the last decade, stories of electrocution via smartphone chargers have started to appear in recent years, especially among teenagers.

Last year a Russian schoolgirl and martial arts champion died of electrocution when her phone fell into the bath as she charged it.

In December, a Malaysian teenager was found dead by his mother with no signs of injury other than bleeding from his left ear, with an earbud still in his ear. He is thought to have been shocked through the earbuds plugged into his phone while it charged. 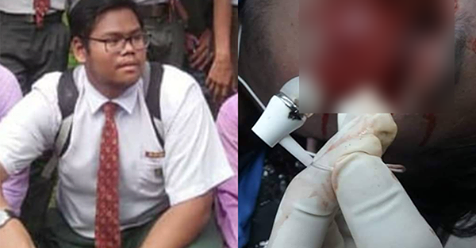 Last year, in Vietnam another teenager was reportedly killed by a faulty cable that was charging her phone on her bed as she slept.

Le Thi Xoan, 14, was found by her parents lying on her bed unconscious in November last year, The Sun reported. Her parents rushed her to a local hospital but doctors were unable to revive her.

A burned white iPhone 6 cable was found on her bed by police in the Vietnamese capital, Hanoi. It is thought that tears in the cord’s casing exposed the live wires inside and that she had rolled onto it in her sleep.