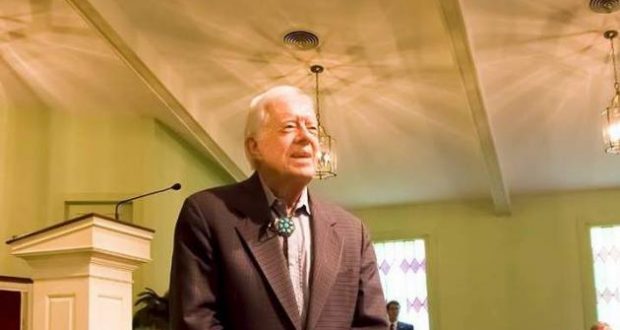 Former President Jimmy Carter has broken with the often contradictory statements of Democrats on President Donald Trump’s response to Iran. Carter expressed his support for Trump’s recent decision to not take military action against Iran after the Islamic regime shot down a U.S. Navy drone over international waters.

“I agree with President Trump on his decision not to take military action against Iran,” Carter said while teaching Sunday school at Maranatha Baptist Church in his hometown in Georgia on June 23, reported NPR.

“I had a lot of problems with Iran when I was in office,” the former Democratic president added.

Carter’s comments come days after Trump pulled back on a plan to carry out a retaliatory response after learning at the last minute that it would cost the lives of 150 people. Trump said he didn’t think the response was proportionate.

Leading Democrats and liberal cable media criticized Trump for his response, contradicting their earlier criticism of the President when he responded with Military action against Syria after chemical attacks on civilians. The contradictory statements: Trump is a warmonger vs. Trump is too timid to attack, have left Democrats fumbling to a response that foreign policy experts see as “measured” and appropriate.

Carter, who has served in the Navy, also shared his view about war, saying he thought most of them were “unnecessary.”

“We’re supposed to be a ‘Christian’ nation are we not? But we are known throughout the world as the most warlike country on Earth. And I would say almost all the wars in which we’ve been involved, have been unnecessary,” he said.

This was the second time the former president has taught at the Sunday school since breaking his hip a month ago, reported NPR.

Some people camped out since 8 p.m. the night before in order to get into the church, according to WABE News’ reporter Emma Hurt.