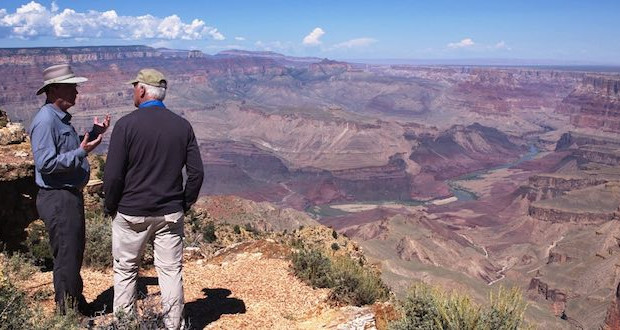 Ticket talks with a geologist about Genesis.

Tacket hopes to change minds with ‘Is Genesis History?’

Del Tackett knows he can’t convince everyone that the events described in Genesis are literally true.

But he does hope that naysayers who watch his new documentary — Is Genesis History? — will at least acknowledge there is contrary evidence to the mainstream, pro-evolution scientific model.

Tackett serves as host of the roughly 90-minute documentary, which features a dozen scientists discussing the scientific evidence for a young Earth, a literal Adam and Eve, and a worldwide flood. Along the way, Tackett visits such sites as Grand Canyon National Park, Coral World Ocean Park in the Virgin Islands, and Washington state’s Mt. Baker.

The documentary – now on your favorite streaming service, DVD, Blu-ray, and video on demand — was a surprise hit in 2017 when it debuted in theaters, finishing No. 1 on opening night and topping mainstream releases like The Lego Batman Movie and Fifty Shades Darker.

Tackett says one of the biggest problems with the pro-evolution, pro-Big Bang scientific model is that no one is allowed to question it.

“Academia has bought into the paradigm. The media has bought into it,” he told the Metro Voice News. “If we look at the history of science, every scientific paradigm that has arisen has captured those areas of power before they collapsed and the next paradigm arose. We’re in the midst of one of those as well. You’re not allowed to speak against it. When a scientific paradigm captures a culture, it’s the only way you think, and anyone who thinks differently is viewed as weird, stupid, idiotic and unscientific – all those terms that are tossed around.”

Although the documentary’s primary audience is Christians, Tackett wants supporters of the mainstream scientific model to watch it, too.

“And hopefully they’ll recognize that the old accusations — that people who affirm the Genesis paradigm are weak-minded or whatever – are not true,” he said. “We would hope that they would then say, ‘You know, there’s something wrong with shutting out evidence and not having a clear, open discussion.’ That’s what I would love to see. Let’s just have an open discussion of this without the name-calling.”

Tackett got involved in the project due to a concern that the mainstream scientific model is gaining in popularity among Christians, especially within seminaries and “among some of our more prominent pastors,” he said. He wants the documentary to encourage Christians who are having doubts about their faith.

“We hope they’re reassured in their belief of Scripture,” he said.

Is Genesis History features such scientists as Douglas Petrovich, an archeologist at Wilfrid Laurier University in Waterloo, Canada; and Marcus Ross, a paleontologist at Liberty University in Lynchburg, Va.

Tackett said he learned a lot while filming the documentary, but also had fun.

“Having the opportunity to rub shoulders with these scientists and learn from them, it was a thrill. But it was – I’ll be honest – at lot,” he said of the physical challenges. “We had some back-to-back trips and we did some serious hiking on occasions. But I thoroughly enjoyed it. And the scientists, the crew, everybody – it was just a wonderful experience.”

Previous: Pray in Response to Charlottesville
Next: King: “We must learn to live together.”