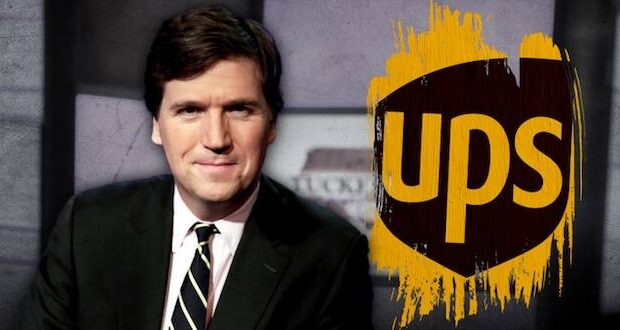 While Presidential candidate Joe Biden continues to ignore questions over incriminating documents and audio concerning ties to Chinese and Ukrainian businesses, someone is interested in the evidence.  A flash drive, in transit with UPS from New York to Los Angeles and containing the information, went missing.

Fox News host Tucker Carlson said Thursday that questions remain regarding the explanation given by the shipping giant about the temporary disappearance of a package containing a flash drive with documents relating to the Biden family’s business dealings.

Calrson, on his show on Thursday, addressed the issue of the flash drive that briefly went missing and UPS located and returned, but reportedly did not explain how the item got separated from the envelope.

“The envelope was securely sealed, we know that,” Carlson said on his show. “Two witnesses saw our producer seal it, and UPS does not dispute that. Was the package torn open accidentally by a machine? That seems unlikely. UPS says that almost never happens. So, we’re left with the obvious explanation. Someone, for some reason, opened our package and removed a flash drive containing documents that were damaging to the Biden family. We would love to know who would do that and why.”

Delivery giant UPS confirmed on Thursday that it found a lost packet of documents that Carlson said would provide evidence in the scandal involving Joe Biden’s son, Hunter Biden, and his overseas business dealings.

“After an extensive search, we have found the contents of the package and are arranging for its return” to Carlson, UPS senior public relations manager Matthew O’Connor said in a statement to Business Insider. “UPS will always focus first on our customers, and will never stop working to solve issues and make things right. We work hard to ensure every package is delivered, including essential goods, precious family belongings, and critical health care.”

UPS did not provide further details about the apparent mishap.

“They claim that the flash drive was found on Monday night by an hourly employee at the UPS building on 43rd Street in Manhattan. They suggested it might have been sitting on the floor there. They couldn’t prove that because remarkably, in a room where millions of high-value packages are handled, there are no security cameras. That’s just what they told us,” Carlson wrote in an op-ed adapted from his show.

The announcement of the recovery came after Glenn Zaccara, UPS’s corporate media relations director, confirmed that Carlson had used the company to ship the materials before they were lost.

“The package was reported with missing contents as it moved within our network,” Zaccara said before they were located. “UPS is conducting an urgent investigation.”

During his Oct. 28 broadcast, Carlson said that a UPS employee notified them that the package “was open and empty … apparently, it had been opened.

“The Biden documents never arrived in Los Angeles. Tuesday morning, we received word from our shipping company that our package had been opened and the contents were missing,” Carlson said.

“The documents had disappeared,” he added.

On Oct. 27, Carlson broadcast an interview of former Hunter Biden associate Tony Bobulinski, who claimed that the former Democratic vice president could be compromised by the Chinese Communist Party due to Hunter and brother James Biden’s business dealings in the country.

Joe Biden hasn’t responded to Bobulinski’s allegations. Last week, during his debate with President Donald Trump, he said he had “not taken a penny from any foreign source ever in my life.”

Previous: China’s crackdown on religion worst since millions murdered in Cultural Revolution of 60s
Next: Walmart prepares for more riots, removes guns and ammo from all store displays