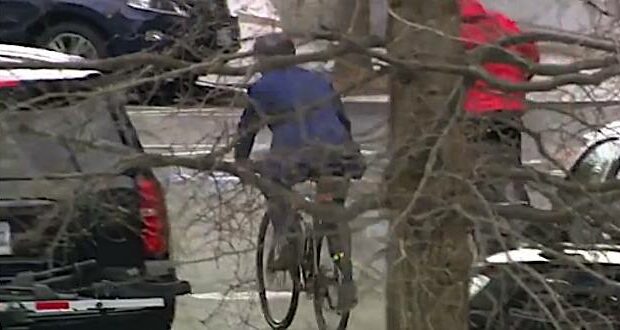 Secretary of Transportation Pete Buttigieg rides off on a bicycle he just unloaded from an SUV. The trip of a few hundred feet was meant to show he was environmentally friendly.

Pete Buttigieg is being mocked for an epic fail captured on video. The United States Secretary of Transportation attempted to make observers believe he had ridden a bicycle to a meeting on the environment where news outlets waited to film his arrival. His ploy was uncovered when a passerby first filmed him and his security detail unloading a bike from an SUV just moments before he rode the bike a very short distance. He was apparently trying to appear to be saving energy.

The Buttigieg bicycle debacle is the latest faux pas after he called for Americans to be taxed based on how many miles they drive.

As Buttigieg is filmed unloading the bicycle, someone off-camera asks why the he would be wearing a suit while bike riding. As he rides off, he’s accompanied by a  security detail in a black SUV, who helped him get on the bike, and another person on a bike.

Critics say it is yet another example of hypocrisy by the left who want strict laws on energy use for Americans but don’t want to follow environmentally friendly practices themselves. Buttigieg has been a cheerleader for President Joe Biden’s efforts to increase the cost of fuel in an attempt to force a move towards “green” energy.  In addition to stopping the XL pipeline, Biden policy makers are considering an increase in gas taxes and taxing people based on the amount of distance they have driven.

During Buttigieg’s hearing to become the United States Secretary of Transportation, Buttigieg was asked a question concerning the gas tax by Senator Rick Scott (R-FL), and whether he would support raising it. “All options need to be on the table. As you know, the gas tax has not been increased since 1993 and it has never been pegged to inflation,” Buttigieg said. “That’s one of the reasons why the current state of the highway trust fund is that there’s more going out than coming in. Buttigieg then spoke on the idea of taxing miles driven, an idea he believes should not be off the table. “A lot has been suggested recently about the idea of vehicle miles travelled. So if we’re committed to the idea of user pace, then part of how you might do that is based on vehicle miles travelled.” Buttigieg suggested.

The proposal, say economists, would harm those in suburbs, small towns, and rural areas who often drive more than 10 miles to work. Those living in urban centers would be unaffected as they tend to rely on taxpayer-funded public transportation.

Asked about the Biden proposal on a mileage tax, Buttigieg has attempted to back-track, saying it was only an “idea.”–Metro Voice and wire services