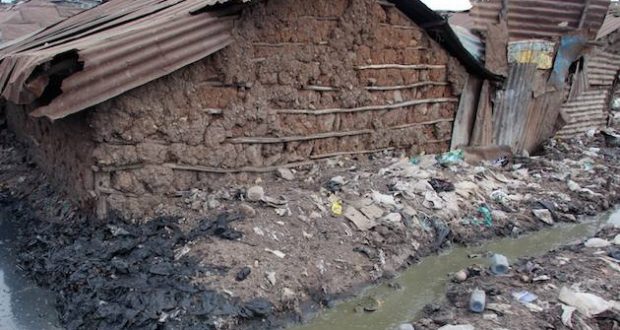 Most sub-Saharan African countries have open sewers in their communities.

Millions of lives are at risk around the world for a lack of toilets according to campaigners marking World Toilet Day. The effort urges governments and businesses to invest more in sanitation.

The toilet crisis is most severe in Africa which President Trump famously called an expletive “hole.” He may have impolitely stated a truth and received the fury of the media but organizations working to provide sanitation say he wasn’t out of line. Disease is spreading through the continent at an alarming rate.

An estimated 4.5 billion people across the world lack access to proper sanitation, said the report. Some 2.5 billion among them do not have adequate toilets, according to U.N. figures. The lack of toilets forces many to defecate in the open — in the streets, in the bushes and by rivers and other water sources.

One in five primary schools and one in eight secondary schools globally do not have any toilets, the group WaterAid said in a new report to mark the U.N.-designated toilet day, observed on Monday, as part of efforts to end the global sanitation crisis.

Among the development goals set by the U.N. in 2015 is a target to ensure everyone has access to a safe toilet by 2030. But campaigners warn this goal will be hard to meet if governments and businesses do not put more money into the sanitation economy.

Sanitation is “the business of the decade,” said Cheryl Hicks, chief executive of the Geneva-based business group Toilet Board Coalition. She told The Associated Press that the group is urging commercial investment to help reduce toilet shortages in countries where governments cannot afford such infrastructure.

“Half the world needs toilets. They don’t have them because the infrastructure is too expensive for governments,” she said.

African countries are among the neediest though Asia comes in a close second as it faces extreme poverty in addition to seeing a population boom.

The new report by WaterAid cites an estimated 344 million children in sub-Saharan Africa who lack a toilet at home, leaving them vulnerable to diarrhea and other water-borne infections.

In the West African nation of Guinea-Bissau, one of 101 countries surveyed by WaterAid, eight in 10 schools lack adequate toilet facilities. The same study reported that 93 percent of households in the East African nation of Ethiopia lack a decent toilet.

Joel Ssimbwa, an entrepreneur who has put up two low-cost facilities in impoverished parts of the Ugandan capital, Kampala, said he launched his business in 2016 after several times he needed to ease himself but had “nowhere to go.”

In September 2007 a Ugandan lawmaker told reporters he was “badly off” and helpless after being photographed urinating against a wall outside the Ministry of Finance in Kampala. He was later charged and fined, despite protesting the lack of sanitation facilities nearby.

There are fewer than 20 free public toilets in Kampala, a city of over 3 million people. Toilets in buildings across the city are often kept under lock and key, apparently to ward off unwelcome users.

Ssimbwa acknowledged that the Shs300 (8 cents) he charges may still be unaffordable to many, the reason he is working on a business model that would allow his clients to pay a uniform monthly fee instead of having to pay each time they check in.

“It is a drop in the ocean, but it creates awareness” of what the government and others must do, he said, talking about his services.