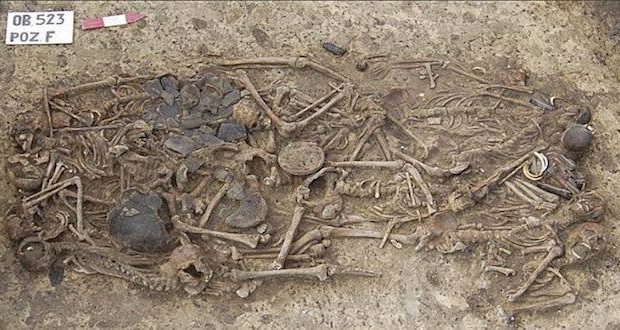 Photograph of the 15 skeletons and grave goods buried at Koszyce site. (Proceedings of the National Academy of Sciences of the United States of America)

In a mysterious case of mass murder that happened  around the time of the destruction of the Tower of Babel in Genesis, 15 bodies found buried in a grave in Poland in 2011 show family connections were important. Through genetic evidence, an international team of researchers has discovered that they were all related to each other and perished as a family.

“We do not know who was responsible for this massacre,” archaeo-geneticist Hannes Schroeder from the University of Copenhagen said in a press release on May 10.

“But it is thought-provoking that it occurred 5,000 years ago. During this period, European cultures were being heavily transformed by Yamnaya cultures migrating from the east. It is easy to imagine that these changes somehow precipitated violent territorial clashes,” he said.

In Biblical terms, it represents a sinful and prideful time in the world’s history that precipitated the destruction of the Tower of Babel and the dispersal of peoples across the world. 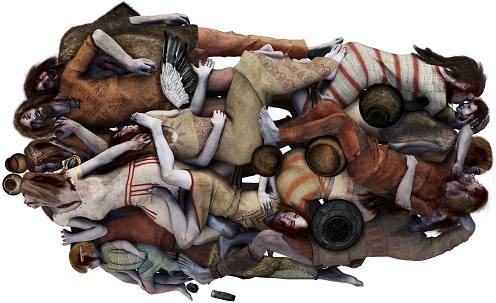 A reconstruction by Polish artist Michał Podsiadło shows the bodies in the grave were placed neatly side by side and with gifts for their last journey. But all of the corpses bear marks on their skulls and were killed brutally. (Media Release by Faculty of Science, University of Copenhagen)

Yamnaya culture, also called pit-grave culture, is believed to have possibly been involved in a massive migration to central and northern Europe that led to the dispersal of Indo-European languages around 5000 years ago, according to a 2018 study.

The mysterious mass burial site was discovered in the southern Polish village of Koszyce. The skeletons were of women, children, and men, and they were found uniquely placed in the grave with each other along with gifts. They were all found to be killed by heavy blows to their heads.

“Closer study of the skeletons revealed that the individuals had all been killed by blows to the head, possibly during a raid on their settlement,” said a study published in the Proceedings of the National Academy of Sciences of the United States of America (PNAS). 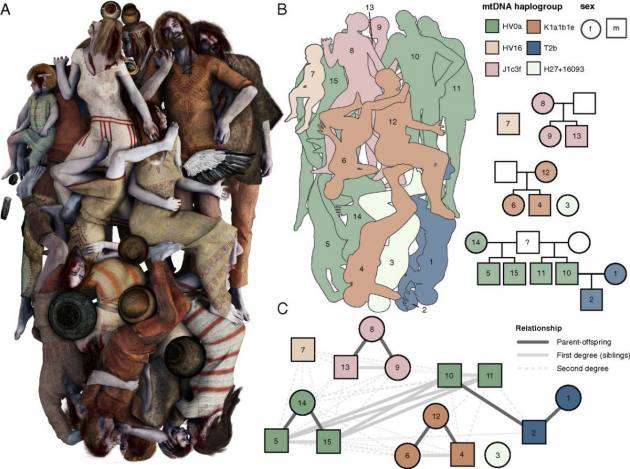 Schematic representation of the burial and pedigree plots showing kinship relations between the Koszyce individuals found in the mass burial site. (Proceedings of the National Academy of Sciences of the United States of America)

Through DNA evidence, an international team of researchers from the universities of Copenhagen and Aarhus and the Archaeological Museum in Poznan found that the murder was of a large, three generational family.

“By analyzing ancient DNA from the skeletons, we were able to map each of the family relationships. We can see that mothers are laid next to their children and brothers side-by-side. Those who buried the dead knew them well,” said Morten Allentoft, an evolutionary biologist from the University of Copenhagen.

“We also see that most of the fathers from this extended family are absent from the grave. Our suggestion is that they weren’t at the settlement when the massacre occurred and that they returned later, and subsequently buried their families in a respectful way,” said Allentoft.

Researchers said that the grave and its tragic story demonstrates that caring for the family meant a lot to people at that time in the region.

“We know from other gravesite discoveries that violent conflicts played out among different cultural groups at this time. However, they have never been as clearly documented as here. All the violence and tragedy aside, our study clearly demonstrates that family unity and care meant a lot for these people, some 5,000 years ago, both in life and in death,” said archaeologist, Niels N. Johannsen of Aarhus University.

The genetic study published in PNAS identified four nuclear families in the grave, mostly represented by the mothers and their children.

“A mother was buried cradling her child, and siblings were placed side by side,” stated the study.

Only one father was placed in the grave. Regarding the unique way in which the bodies were buried to each other, the study said: “The only father present in the grave is individual 10, whose wife and son are placed together opposite him in the grave. In addition, there is a young boy (individual 7), aged 2–2.5 y, whose parents are not in the grave, but he is placed next to other individuals to whom he is closely related through various second-degree relationships.”

Much can be learned about ancient burial practices in the Old Testament. Genesis 23:4 states, “I am a foreigner and stranger among you. Sell me some property for a burial site here so I can bury my dead.”

Previous: Tolkien: the fellowship behind the fantasy
Next: Asia Bibi faces death threats in Canada