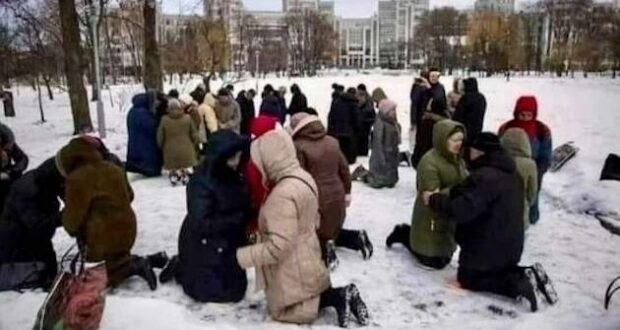 Ukrainians gather in a city park to kneel in prayer. Photo: video.

Abandoned by the U.S., Ukrainian Christians turn to prayer

President Joe Biden on Tuesday used the word “invasion” concerning Russian troops that had entered Ukraine. Now, as the U.S. fails to abide by a 1994 treaty to help them defend their country, Ukrainian Christians there are deploying their own weapon: a shield of prayer and worship.

“People are worried, but we encourage them to look to Jesus with all of our might, because it’s only through prayer that we can keep peace in our country,” Kyzmenko Dmytro, pastor of New Generation Church in Lviv, told a reporter with CBN News.

Seventy percent of Dmytro’s congregation is from eastern Ukraine, many of them escaping ongoing violence there. “My heart right now is with my relatives I left behind in Donetsk: My mom, my sister and my grandmother, but they cannot leave this territory and it breaks me,” said Kateryna Skudan, who escaped from Donetsk.

With weekend talks between President Biden and Russia’s President Vladimir Putin failing to calm growing tension, the White House continues to warn of major military action. “We’re in the window when a Russian invasion could start at any time if President Putin so decides,” Secretary of State Antony Blinken said. “That includes in the coming days.”

As that’s happening, in a small upper room near Lviv’s city center, Christians from across Africa are praying for their host country, ready to be the hands and feet of Jesus to those who may have to flee.

“As Christians and as people of God, it’s our job and our duty to pray for the whole world because the Lord wants peace,” said Timothy Adegbile, a Nigerian pastor from Christ Embassy Church.

Some Ukrainians are now praying outdoors in the snow for the peace of their country. Churches are organizing prayer and fasting gatherings to bring the battle into the spiritual realm. Christians from Africa are also praying for Ukraine.

Others warn that Ukrainian Christians are being silenced in areas occupied by Russian separatists.  “They are forbidden from having church meetings together, but they still do it, secretly, and I think this is what will happen if Russia invades, but the truth is that it is impossible to stop the church of Jesus Christ,” one pastor said.

In 1994, as Metro Voice reported, Ukraine signed a treaty to give up its nuclear arsenal in exchange for security from the U.S. and Britain against a Russian invasion. The U.S. under Barack Obama and now Biden, ignored the treaty, ushering in a Russian invasion.