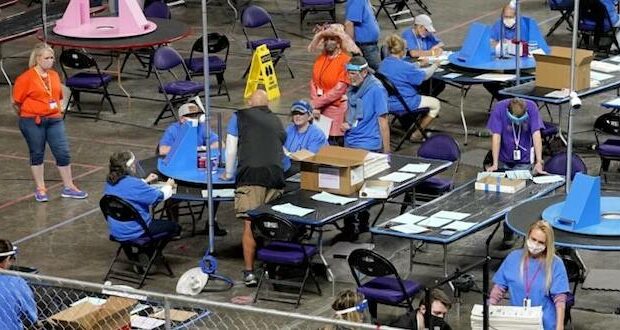 Arizona officials say that the audit of the 2020 election in Maricopa County is nearing the finish line as legislators from numerous states visit to observe the process.

In addition to having completed recounting 76 percent of the ballots, they say the next phase of the audit is ready. It’s being overseen on the legislative side by Ken Bennett, former Arizona secretary of state.

The end of the recount comes as former Obama Attorney General Eric Holder says the audit needs to stop and encouraged the Biden adminsitration to step in.

“All the things they are doing now are counterproductive. They are without basis, and they will hurt, they will harm, our hard-won democracy,” Holder asserted, referring to the Maricopa review and similar efforts sprouting in places across the country.

Holder then urged the Justice Department to become “aggressively involved.”

But those threats have not stopped interest by elected officials from a growing number of states.

Delegations from Pennsylvania, Georgia, and Alaska were given tours of the audit in Phoenix this week. Michael McDonald, the Nevada Republican Party chairman, went to the venue to study the process, as did others from Colorado. A Virginia State Senator is expected to visit on Thursday.

Lawmakers visiting the audit were shown how workers are hand counting the nearly 2.1 million ballots cast in Maricopa County last year, in addition to evaluating the paper for abnormalities like mail-in ballots not having folds. They learned about audit procedures like how the ballots are being examined and chain-of-custody processes. Many said they hoped to take what they learned back to their states and order a similar audit there.

“We have a lot of the same concerns and issues unresolved in Pennsylvania,” stated Pennsylvania Sen. Doug Mastriano, a Republican. He noted that numerous constituents have told him that they want an audit performed to address fraud concerns.

“When you have about 47 percent of the state’s population questioning the reliability of the election, that’s the significance of your problem. And so the only way I could see ahead of this putting this all to rest—and let the cards fall where they may—do a scientific forensic audit, like Arizona’s doing,” he added, referencing poll numbers.

The Arizona Senate Judiciary Committee, with the backing of Senate President Karen Fann, last year subpoenaed ballots and other election materials from Maricopa County. Democrats refused to turn over data and hard drives until they lost a court battle. A Judge sided with Republicans declaring the subpoenas valid.

The Arizona Democratic Party has refused to participate in the effort and continue to fight it in the media.

Fann said on NPR last month that she’s had senators and election officials from other states contact her about election-related issues they’ve seen in their states. She noted that many of her constituents wonder about the integrity of the 2020 election.

“I don’t care if you’re in Arizona or any state across the nation. If we have those kind of doubts, we owe it to them to answer their question. This will be the basis of a gold standard,” she said.

Pennsylvania is eyeing using the GOP-controlled Senate’s authority to conduct an audit of at least one county, though the timeline for such a process remains unclear. A top Republican chairmanstated that he supports an audit. Mastriano hopes to audit a Republican county and a Democrat county. He would recommend using the same firms that are conducting the audit in Arizona, including Florida-based Cyber Ninjas.

“I’m interested in the firms that were involved just because they know how to do it and the steep learning curve that they had, this is unprecedented, the forensic audit that’s going on here,” he said.

Attorneys for Cyber Ninjas said in a court filing in April that the firm “has already performed similar work with respect to an audit undertaken in Antrim County Michigan and expects to have similar business opportunities to undertake such work for other governments around the country.”

Previous: Thousands of coaches and athletes return to FCA Summer camps
Next: Consumers tire as corporations insert ‘woke’ politics into all aspects of life