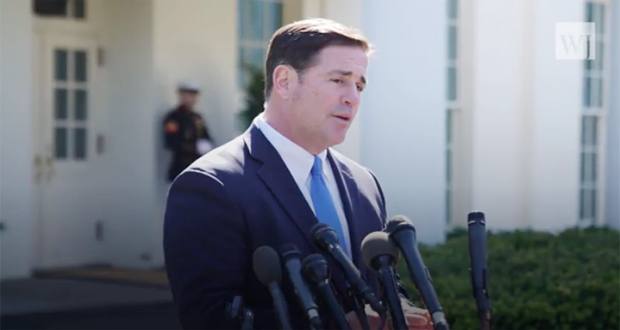 Arizona Governor Doug Ducey refused to give in to pressure from a state secular organization this week, publicly affirming that he has no intention of removing religious messages posted to his gubernatorial Facebook account on Easter.

Ducey’s statement came Thursday after several local outlets broke headlines on the Secular Coalition for Arizona’s response to the posts — which accused the governor of violating the First Amendment.

One such outlet — azcentral.com — posted the story to Twitter on Thursday evening alongside a fiery quote from a constituent.

“Great sensitivity, Doug. That’s the last time this Jew is voting for you,” the constituent had been quoted in the article.

This prompted Ducey to respond.

“We won’t be removing this post. Ever. Nor will we be removing our posts for Christmas, Hanukkah, Rosh Hashanah, Palm Sunday, Passover or any other religious holiday,” he wrote in a tweet.

“We support the First Amendment, and are happy to provide copies of the Constitution to anyone who hasn’t read it,” Ducey continued.

The initial controversy had arisen late last week on Easter Sunday when the governor posted to Facebook and Twitter saying, “He is risen” and wishing Christian constituents a “happy and blessed Easter!”

The post was quick to upset members of the Secular Coalition — a nonprofit organization that “works to ensure a secular state government” — who took major issue with the picture Ducey included alongside his post, quoting to the Bible.

Within 48-hours Dianne Post, an Attorney with the Secular Coalition, had drafted and publicly released a three-page letter to Ducey demanding that the “effusive” post be removed, and that he refrain from posting similar messages in the future.

“On behalf of citizens and taxpayers, we urge you to remove the effusive Easter greeting that is much too tied to religion from the Facebook page and to desist in the future from expressing such religious sentiment on government property or time,” Post wrote.

“The government must respect the rights of conscience of all citizens, including those who in good conscience reject belief in a god,” Post continued.

Post had gone on to cite a handful of Supreme Court decisions, interpretation of the First Amendment of the United States Constitution and sections of the Arizona state constitution. She alleged that precedent has “said time and time again that the ‘First Amendment mandates government neutrality between religions,’” also claiming that the governor should avoid making his non-religious constituents feel like “outsiders.”

The attorney also made mention of other religious messages from Ducey — including a post he had made earlier in the previous week wishing Jewish constituents a “Happy Passover” weekend.

As of this report, Ducey has stayed true to his word, refusing to remove any religious or holiday-related messages from his accounts.

Previous: Jerrold Nadler: another socialist in Congress
Next: Over 19,000 saved in Manila after Will Graham preaches at historic gathering