Home / News / ‘We Will Work, We Will Pray and We Will Fight,’ against opioid crisis says president 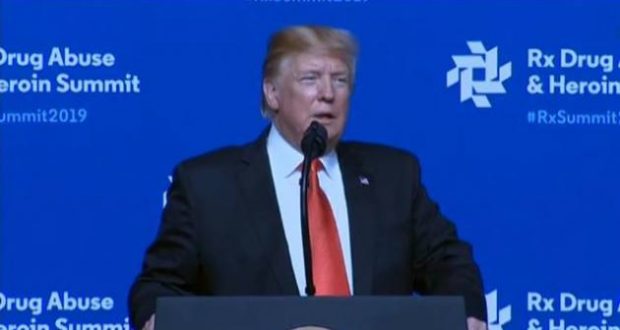 The Trump administration is increasing the commitment in the fight against the opioid crisis. Trump says the federal government will continue to invest billions of dollars into the fight and is finalizing plans to hold drug makers accountable.

At a drug summit Wednesday in Atlanta, Trump gave a progress report on the efforts of his administration.

“My administration is deploying every resource at our disposal to empower you, to support you and to fight right by your side,” he said.

Trump’s speech came one day after his administration brought its first criminal charges against a major drug distributor – Rochester Drug Co-Operative is accused of turning a blind eye to thousands of suspicious orders for opioid pain killers.

“There is just nothing going to stop us, no matter how you cut it,” said Trump.

In his speech he also announced his administration’s commitment to set aside $6 billion for things like youth prevention and overdose-reversing drugs.

“We’re going for even bigger numbers this year,” he vowed, going on to list other administration accomplishments like convincing China to designate fentanyl, or synthetic heroin, as a controlled substance and cracking down on online sales.

Critics, though, say it’s not enough.

The two top painkillers were fentanyl and heroin.

Some of the states hardest hit by the opioid crisis include New Hampshire, West Virginia, Iowa, Pennsylvania and Ohio.

And in Chicago alone this week, police are investigating 13 overdoses and four deaths from heroin.

“We will work. We will pray. And we will fight for the day when every family across our land can live in a drug-free America,” said Trump.

Previous: City of Topeka announces emergency month-long closure of 21st Street Bridge over I-470
Next: Every child in Sunday school said they would die for Christ, minutes later half did