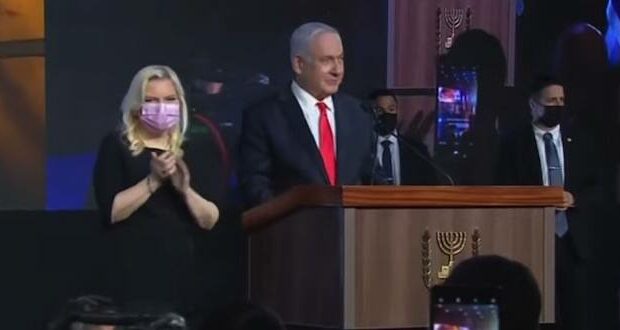 Prime Minister Benjamin Netanyahu has secured his largest-ever electoral victory over his rivals after the fourth attempt in two years to unseat him.  Netanyahu’s Likud party is currently leading as the largest party, but neither he nor his rivals have enough seats to clinch a majority and end the country’s years-long political stalemate.

Israeli Exit polls show Netanyahu’s Likud receiving a strong 30 to 31 mandates. The tally is at least 12 seats higher than the next largest party: the left-wing Yesh Atid led by Yair Lapid. While official vote totals will only be completed in the coming days—with the potential to alter Knesset distributions by several seats—it’s clear that Netanyahu has emerged as the only viable candidate for prime minister.

In Israel, people do not vote for individuals but for parties to fill the 120-seat Knesset, or parliament. Sixty-one is the magic number of seats each party is aiming for to seize control of the government. But because no party has ever won a 61-seat majority on its own, parties must partner together to form government coalitions.

Netanyahu declared victory on Tuesday night and thanked Israel’s citizens, tweeting: “You gave a huge victory for the right and the Likud under my leadership. The Likud is ahead of the next largest party by a large margin.” He added that “it’s clear that most Israelis are right-wing, and want a strong, stable right-wing government.”

TOUR ISRAEL: Join Metro Voice for the experience of a lifetime in October  2021

Exit polls currently point Netanyahu towards a narrow government of preferred right-wing and religious coalition partners. Yet as he has done repeatedly following previous campaigns, he may ultimately succeed to recruit parties—or members of parties—that campaigned against him to join into a new coalition.

The latest data show Netanyahu’s right-wing religious bloc with 59 seats, even with a potential partnership with Naftali Bennett’s right-wing Yamina party. Meanwhile, the parties that oppose Netanyahu have 56 seats.

The victory places Israel’s longest-serving prime minister in the driver’s seat—potentially for the next four years. With a majority right-wing coalition, Netanyahu can focus on rebooting the economy of a startup nation ravaged by coronavirus lockdowns. He has promised to reduce taxes and slash government bureaucracy, policies traditionally opposed by Israel’s left-wing.

Netanyahu pleaded with his political rivals early Wednesday to put aside their differences and partner with him to avoid a fifth election later this year. The embattled prime minister said he will be “talking with all MKs” who might be willing to help him form a stable government.

“I stretch out my hand to all MKs who believe in this path,” he said. “I don’t rule anybody out. I expect all who believe in our principles to act in a similar fashion. Join us in this government.”