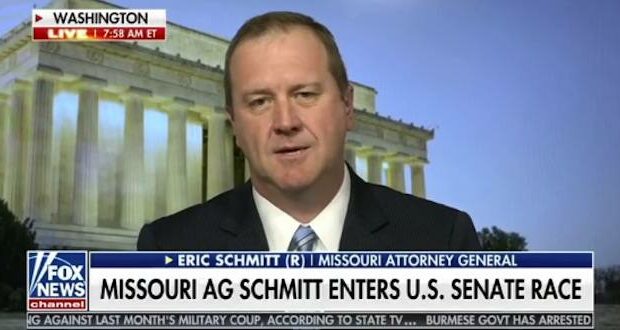 Schmitt, a former state legislator from St. Louis County, was appointed attorney general in 2019 and won a full term in November 2020. He has long harbored ambitions to be a U.S. senator. In 2017, as Josh Hawley was deciding whether to challenge incumbent Claire McCaskill, Schmitt traveled to Washington to discuss the race with leaders of the National Republican Senatorial Committee. He ultimately decided not to run when Hawley launched his campaign and became the clear frontrunner.

Schmitt was considered a moderate during his two terms in the Missouri Senate. But his politics evolved as the state turned a deeper shade of red over the last decade — and his ambitions turned toward a statewide race. Since becoming attorney general, his national profile has grown through a series of lawsuits that earned him praise from conservatives.

Last year, Schmitt sued the Chinese government, accusing it of lying and covering up the danger posed by the coronavirus. And just as Blunt was announcing his decision not to run, Schmitt joined a lawsuit against the Biden administration challenging an executive order tightening regulation of greenhouse gas emissions. But his most controversial move as attorney general was joining the legal effort to overturn President Joe Biden’s 2020 victory.

He has also drawn accolades for his efforts to combat violent crime in the urban core, drawing praise for the “Safer Streets Initiative,” a joint effort he launched in 2019 between the attorney general’s office and U.S. attorneys. But a push by Schmitt to convince Missouri lawmakers to give him the power to prosecute certain homicide cases in St. Louis has been controversial, with critics contending he was simply trying to strip authority away from St. Louis’ first black prosecutor, Circuit Attorney Kim Gardner.

The announcement by Schmitt for the senate run could affect others considering joining the race.