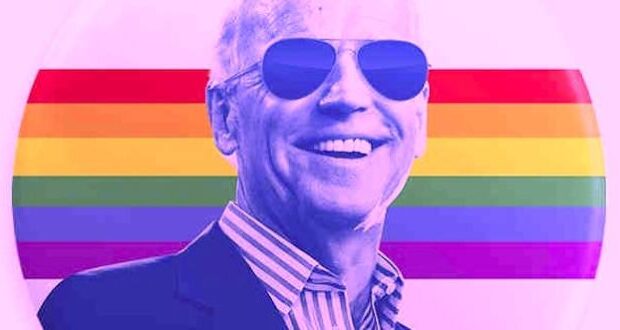 Joe Biden has made “sweeping promises” to LGBT activists, the Associated Press is reporting.

Biden plans to “carry out virtually every proposal” that LGBT activists have pushed for in recent years, Biden’s agenda includes allowing individuals who identify as transgender to enlist in the military, as well as allow trans-identified servicemen to enter women’s-only areas (and vice versa), and cover trans-surgeries and cross-sex hormones for members of the military. He also plans to require all government contractors to have anti-LGBT discrimination policies and will create LGBT rights positions at the State Department, National Security Agency and other federal agencies.

The Biden campaign’s website includes a lengthy document detailing “the Biden plan to advance LGBTQ+ equality in America and around the world.”

“The Equality Act is the best vehicle for ensuring equal rights under the law for LGBTQ+ Americans and will guarantee that LGBTQ+ individuals are protected under existing civil rights laws,” the document says. The Equality Act, the passage of which Biden has vowed to make a top legislative priority during his first 100 days in office, has received criticism from conservatives over its implications for religious liberty.

Although passage would require cooperation from the Senate, Biden plans to take several executive actions such as rolling back broad exemptions to nondiscrimination laws that his campaign argues allow “businesses, medical providers, social service agencies, state and local government officials and others to discriminate against LGBTQ+ people.” Among the things this plan would do is require medical staff to perform elective procedures on trans-identified individuals even if doing so goes against their religious beliefs.

Biden will become president-elect on Dec. 14 should the electoral college vote and declare him the winner.

Previous: 5 Ways to ensure medication safety during COVID-19
Next: Francis Collins, Christian head of NIH, encourages use of COVID-19 vaccines