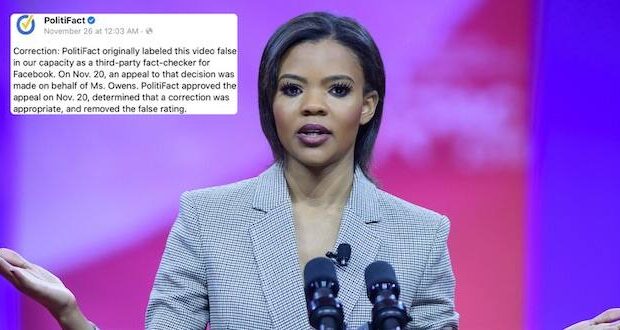 Conservative Candace Owens has forced Politifact to admit that Joe Biden is really not president-elect.

A fact-checking website has admitted that Joe Biden is not president-elect.

Politifact, a left-leaning site that media outlets, including Twitter and Facebook, rely on for “fact-checking,” had originally issued a “false” label to a video by Candace Owens who said Joe Biden wasn’t the president-elect.

Now, Politifact has admitted Owens was correct and that the “president-elect” label should not be used by media and Democrats in describing Biden. Owens threatened to sue the organization unless they removed the false label from her video.

The liberal-funded site has now issued a statement responding to Owens:

“Correction: PolitiFact originally labeled this video false in our capacity as a third-party fact-checker for Facebook,” PolitiFact said. “On Nov. 20, an appeal to that decision was made on behalf of Ms. Owens. PolitiFact approved the appeal on Nov. 20, determined that a correction was appropriate, and removed the false rating.” 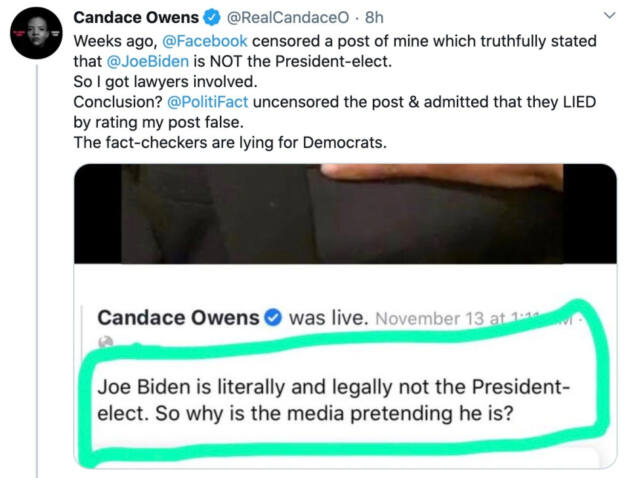 Biden has declared victory in the presidential election and many news outlets have been referring to him as president-elect. The Epoch Times isn’t calling the race until litigation contesting the election results plays out.

Owens in the video discussed how Biden is not president-elect until the Electoral College decides who to vote for and those votes are counted in a joint session of Congress on Jan. 6, 2021.

“Joe Biden is literally and legally not the President-elect. So why is the media pretending he is?” Owens wrote in an accompanying caption.

Politifact rated the assertion false, prompting the threat of legal action from Owens.

“Weeks ago, @Facebook censored a post of mine which truthfully stated that @JoeBiden is NOT the President-elect. So I got lawyers involved. Conclusion? @PolitiFact uncensored the post & admitted that they LIED by rating my post false. The fact-checkers are lying for Democrats,” Owens wrote on Nov. 28, after the correction was issued.

Politifact, which receives funding from Facebook, is one of about a dozen websites utilized by Facebook to perform fact checks, which have been widely criticized for their oft-subjective nature.

Politifact leans left. The website published an article earlier this month saying Biden “is president-elect of the United States.” The website acknowledged that there is still more left in the process and that the declaration is subjective.