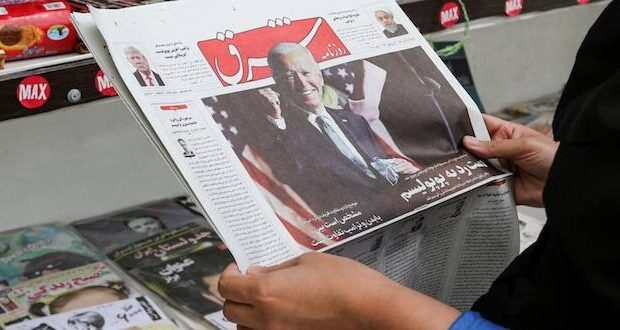 The Iranian Islamic regime is celebrating the current lead Joe Biden has in the presidential race.  According to Real Clear Politics, Biden stands at 259 electoral votes – shy of the 270 needed to declare victory. Other American news outlets have already declared Biden the winner as have Iran’s state-controlled newspapers.

The last three years has indeed been a nightmare for Iran, the world’s biggest sponsor of terrorism, and its proxies in Syria, Lebanon and Yemen. No U.S. administration before the current one has so seriously and systematically responded to the mullahs, their rogue state and their despotic allies.

At the beginning, President Donald Trump pulled the U.S. out of the Joint Comprehensive Plan of Action (JCPOA), commonly known as the Iran nuclear deal, which Iran never signed and which paves the way for Iran to have nuclear weapons. Then, the Trump administration re-imposed primary and secondary sanctions on Iran’s energy, banking and shipping sectors.

During the last two years, several other Iranian entities were added to the sanction list. The killing of General Qassem Soleimani was also a huge blow to Iran’s regime, particularly the Islamic Revolutionary Guard Corps (IRGC) and its proxies across the Middle East.

The sanctions, in fact, have imposed significant pressure on the Iranian government — to such an extent that the Iranian leaders have had to cut their funding to their allies, militia and terror groups.

A year into the pressure, the state-controlled Syrian newspaper Al-Watan reported that Iran halted its credit line to the Syrian government. Some of Iran’s authorities publicly announced that they also do not have money to pay their mercenaries abroad. In an interview with the state-run Ofogh Television Network, for instance, Parviz Fattah, the current head of the Foundation for the Underprivileged (Mostazafan Foundation) stated:

“I was at the IRGC Cooperative Foundation. Haj Qassem [Soleimani, commander of the IRGC Quds Force who was killed by a U.S. drone strike] came and told me he did not have money to pay the salaries of the Fatemiyoun [Afghan mercenaries]. He said that these are our Afghan brothers, and he asked for help from people like us.

Tehran’s diminishing resources have also caused Iranian leaders to cut funds to the Palestinian terror group Hamas and the Lebanese militant group, Hezbollah. Hamas was forced to introduce “austerity plans” while Hassan Nasrallah, the leader of Iran’s proxy, Hezbollah, has also called on his group’s fundraising arm “to provide the opportunity for jihad with money and also to help with this ongoing battle.”

The country’s economic situation became so dire that the Iranian President Hassan Rouhani admitted that the Islamic Republic is encountering the worst economic crisis since its establishment in 1979. The political deputy of the province of Bushehr, Governor Majid Khorshidi, told a gathering on July 14 that they should not ignore U.S. sanctions: “We used to see this approach [of ignoring U.S. sanctions] from the previous [Ahmadinejad] administration and unfortunately it still continues,” he added. “But I have to say that sanctions have broken the economy’s back.”

Thanks to the current administration’s pressure, Iran’s currency, the rial, has been in free fall in the last three years. As of November 7, 2020, a U.S. dollar is worth approximately 250,000 rials. Before the current U.S. administration imposed a “maximum pressure” policy against Tehran, a U.S. dollar had equaled nearly 30,000 rials. During the last year, Iran’s oil exports also sank to a record low. The country’s budget heavily relies on selling oil.

As pressure kept mounting against the regime, Tehran also faced several widespread protests in the country, which endangered the hold on power of the ruling clerics. Now, the regime feels that all of the current administration’s pressures will be lifted soon and the golden days will be back again.

It is unfortunate that Iran’s ruling mullahs view a possible victory of the Democrat Party in U.S. elections as a win for the Tehran regime, its proxies and militia groups. President Rouhani has already called for restoring the nuclear deal. It could well be a loss for continuing peace in the region and for finally restoring the violated Iranian people’s hoped-for human rights.

–Dr. Majid Rafizadeh is a business strategist and advisor, Harvard-educated scholar, political scientist, board member of Harvard International Review, and president of the International American Council on the Middle East. He has authored several books on Islam and US foreign policy. He can be reached at Dr.Rafizadeh@Post.Harvard.Edu. Reprinted from Israel World News with permission.