Since William arrives in Jordan prior to his visit to Israel.

JERUSALEM – For the first time ever, Israel is being visited in an official capacity by the British Royal monarchy.

Prince William is set to arrive in Israel this week for the first official visit of a member of the British royal family, ending the monarchy’s decades-long mostly hands-off approach to a region of conflict for which the British government is blamed for causing before WWII. 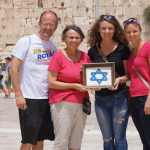 Here, Anita and Emma hold a Star of David, sewn and framed by Anita’s mom while Anita visited Israel for the first time in the 1980s. Pictured left to right, Dwight, Anita, Emma and Hannah Widaman.

READ OUR STORY ON FAMILY TRAVEL  TO ISRAEL

Though the trip is being billed as non-political, and places a special emphasis on technology and joint Israeli-Arab projects, the Duke of Cambridge will also be meeting with the Israeli and Palestinian leaders and visiting capital city landmark sites in Jersusalem.

The prince kicks off his Middle East visit today in Jordan where we will meet refugees from the civil war in neighboring Syria and tour the famous archaeological site at Jerash, where his wife, the former Catherine Middleton, once visited when her family lived in Jordan.

On Monday he will arrive in Israel and stay in Jerusalem’s King David Hotel, the elegant British-era edifice and the former headquarters of the British Forces when they ruled the region before Israel’s Independence. From there he will visit coastal Tel Aviv, Israel’s financial and cultural capital, and Ramallah in the ancient Jewish district of Samaria (now called the West Bank), seat of the Palestinian autonomy government. On the docket are scheduled meetings with young entrepreneurs, visits to Israel’s vibrant tech and media sectors and meetings with young Jewish and Arab soccer players.

Kensington Palace, William’s official residence, said the visit was aimed “to meet as many people from as many walks of life as possible – and use the spotlight that his visit will bring to celebrate their hopes for the future.”

But politics have already seeped into the agenda. The royal itinerary mentioned Jerusalem as being part of “the Occupied Palestinian Territories,” angering Israeli politicians. Jerusalem Affairs Minister Zeev Elkin – who is running for mayor of the city in this year’s elections – called the reference a “distortion” that cannot “change reality.”

Israel reunited east Jerusalem with the main city after Jordan was defeated in the 1967 Mideast war. The U.N. considers the reunification of Israel’s ancient Capitol an annexation and the move is still not internationally recognized. Israel considers the city, home to holy sites sacred to Jews, Christians and Muslims and the emotional epicenter of the conflict, as an inseparable part of its capital. The Palestinians claim east Jerusalem as a future capital though the city does not appear in the Koran.

Britain has deep roots in the region, having governed, what was then called Palestine from Roman times, from 1920 to 1948 under a League of Nations mandate. But it has since taken a back seat to the United States in matters of mediating war and peace efforts. The royal family has mostly steered clear of politics though Prince Charles has been criticized for comments appearing supportive of the terrorist organizations Hamas and the PLO. The PLO has been renamed the Palestinian Authority and runs the Palestinian-dominated areas.

One way of doing so has been to avoid any official visits. William’s father, Prince Charles, attended the 2016 funeral of former Israeli President Shimon Peres but in a private capacity. During that trip, the heir to the throne paid a low-key visit to the grave of his grandmother, Princess Alice. William will also visit her final resting place in Jerusalem’s Church of St. Mary Magdalene above the Garden of Gethsemane on the Mount of Olives.

The prince will also visit the Yad Vashem Holocaust memorial in Jerusalem, where his great-grandmother is recognized as a Righteous Among the Nations for her role in rescuing Jews during the Holocaust.

Princess Alice, the mother of Prince Philip, the Duke of Edinburgh, hid three members of the Cohen family in her palace in Athens during the Nazi occupation of Greece in World War II. Thanks to her, the Cohen family survived and today lives in France. The princess died in 1969 and in 1988 her remains were brought to Jerusalem. In a 1994 visit to Yad Vashem, Prince Philip planted a tree there in her honor.

Unlike his father and grandfather, Prince William will be arriving in Jerusalem at the request of Her Majesty’s government. As such, he’ll be meeting with Israeli President Reuven Rivlin, Israeli Prime Minister Benjamin Netanyahu and Palestinian President Mahmoud Abbas. Both sides seem to be looking forward to the first-ever royal visit.

Though William is not expected to comment on the long-standing conflict and stalled peace talks, his visit is being used for propaganda purposes by Palestinians as recognition of their “occupied” status.

In Israel, many are excitedly awaiting the pomp and pageantry that accompanies the visit of the second in line to the throne. 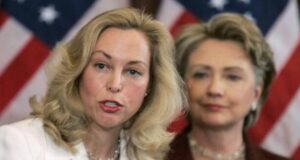