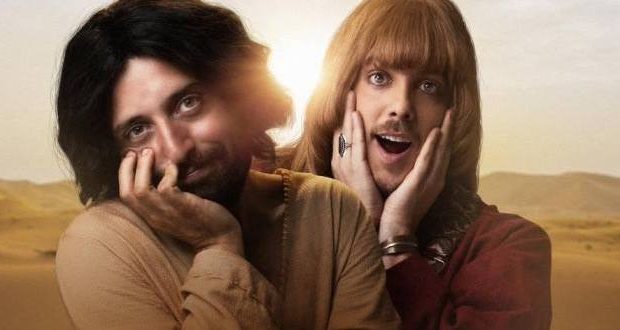 Christians of all denominations have joined to condemn a Netflix movie that depicts Jesus in a homosexual relationship and the Virgin Mary as an adulterous. The gay community even says the show is too “flaming.”

Catholics, Evangelicals, mainline protestants, conservative politicians and public figures have responded with almost a million people signing a petition for the Christmas streaming series to be taken down.

In a Netflix teaser (below) for the 46-minute program Jesus, who is turning 30, brings a “surprise guest” to meet his family.

Jesus and his boyfriend Orlando arrive at Mary and Joseph’s house, where the disciples, Mary Magdalene and other friends are waiting to throw him a surprise birthday bash. God, who has been posing as Jesus’ uncle, shows up.

The comedy troupe previously had another special titled The Last Hangover, that “reimagined the Last Supper as a night of drunken apostle mania followed by a bleary morning after,” according to the streaming website decider.com

As of this week, More than 1,300,000 people had signed a Change.org petition by Tuesday afternoon calling for the film to be pulled for “seriously offending Christians.”

“We support freedom of expression, but is it worth attacking the belief of 86 percent of the population,” tweeted Eduardo Bolsonaro, the eldest son of Brazil’s president and a member of Congress.

Brazilian pastor and congressman from São Paulo Marco Feliciano took to Twitter to express his dismay and anger over the film. “Christians and non-Christians have asked me to take action against the irresponsible members of Porta do Fundo,” he wrote. “It’s time we took a collective action — churches and all good people — to put an end to this.”

Brazil remains the world’s biggest Catholic country and Evangelical churches grow at a record rate. Around 64 percent of the population identified as Catholics, according to the 2010 census.

Henrique Soares da Costa, a bishop in the northeastern state of Pernambuco, said on Facebook he had cancelled his Netflix subscription over the film, describing it as “blasphemous, vulgar and disrespectful.”

Netflix Brazil has not commented.

The film is available to American subscribers, but a link on the U.S. Netflix website referring to the program says the page “can’t be reached.” A representative for the streaming giant told a New York newspaper that the company is currently looking into the issue.

The show has also been criticized by the LGBT community for its stereotypes of gay men.

Previous: Researcher finds reasons for hope for rural and small-town churches
Next: 1,700 come to Christ in Cambodia at Franklin Graham crusade