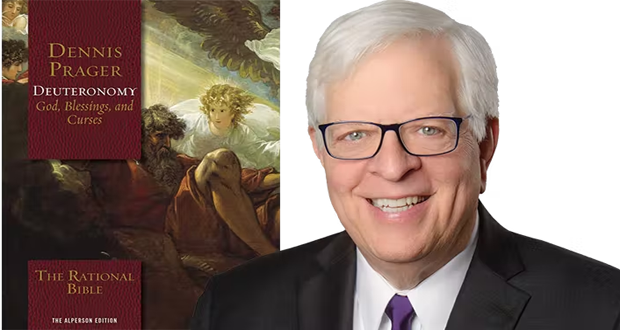 The book of Deuteronomy provides a roadmap of life lessons showing how to be a good person, radio host Dennis Prager said.

“There is a word for the study of goodness and how to make a good world: wisdom,” he wrote on FoxNews.com. “Most of the wisdom of Western civilization — the civilization that has been the most successful in history in making good societies — comes from the Bible. That is why the Bible is the most influential book ever written.”

“Do not show partiality in judgment” (1:17). A compassionate society is built on justice, not compassion. That might sound counterintuitive. But while we should be compassionate in our private lives, the state must be preoccupied with justice. That is the reason for this law: judges are forbidden not only to show favor to the rich but also to the poor. The purpose of a judge is to dispense justice.

“You will find him if you seek him” (4:29). Just as finding a spouse can take years of searching, so, too, finding God can take years of searching. But like a good spouse, the effort is worth it. Without God, life has no ultimate — no objective — meaning. If there is no God, every one of us is as insignificant as a grain of sand. It is not a coincidence that as fewer Americans take God and religion seriously, suicide and depression rates have risen dramatically.

“You shall have no other gods before Me” (5:7). We have more “gods” in modern life than idol-worshippers had in the ancient world. Just to cite one of at least a dozen examples, many secular people believe in science the way religious people believe in God and the Bible. But there is a big problem with that. Unlike God and the Bible, science has nothing, simply nothing, to say about good and evil or about the meaning of life.

“Love God with all your heart” (6:5). Given all the unfair suffering in the world, it is difficult for many people to love God. I admit I am one of them. God knows this love is difficult; that’s why Deuteronomy commands us to love God. It is an amazing commandment. And it’s amazing in another way: Deuteronomy is the first book in history to present a God who loves human beings and who wants humans to love him.

“Repeat them again and again to your children” (6:7). Parents need to teach their children wisdom and moral values all the time. In the words of Deuteronomy, “Talk about them when you are at home and when you are on the road, when you go to bed and when you get up.” Otherwise, others — such as teachers and social media — will teach your children neither wisdom nor good values.

“You shall be happy …” (12:7). That there is a biblical law to be happy is what has shaped my entire approach to happiness: it is a moral obligation, not just an emotional state. We owe being, or at least acting, happy toward everyone in our lives. And yes, even to God — no one makes the case for atheism more persuasively than unhappy religious people.