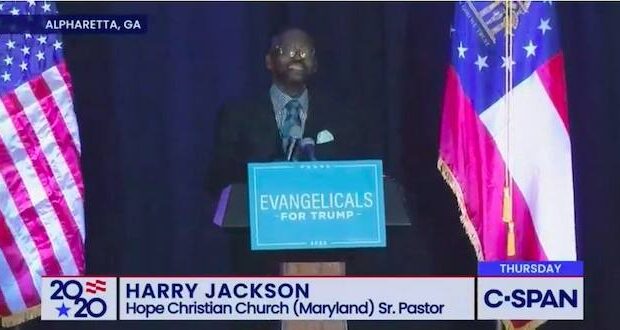 Leading evangelicals spoke about the upcoming presidential election at an event called “Evangelicals For Trump — Praise, Prayer and Patriotism,” which was held in July in Alpharetta, Ga.

The event featured prominent African-Americans including the niece of Dr. Martin Luther King Jr. – Dr. Alveda King, Bishop Harry Jackson and others including Ralph Reed, Dr. Richard Land, Paula White-Cain, and Jentezen Franklin among many others. They praised his support for conservative values while simultaneously warning of the Democratic Party’s anti-religious agenda..

White-Cain, who is considered to be Trump’s personal faith adviser, told his supporters that Joe Biden is “a Trojan horse for a very radical left agenda that is behind him that wants to take down our churches.” She added that Christians support should the president over the “very deceptive media.”

Dr. Richard Lee, founding pastor of First Redeemer Church in Atlanta, accused several governors and mayors of “bossing the churches around … to see what you will do in case (Biden) gets in office and they can come after you.”

Noting the party’s unwavering support for abortion up to the moment of birth and some democrat leaders who have supported allowing babies who survive abortion die, Lee called the current Democratic Party that allows that “an evil party” that has been seized by the “the spirit of the anti-Christ.” Lee stated that he does not see Democrat voters as evil but as wonderful people who have been deceived by party leaders.

According to the Associated Press, Trump’s support of conservative values has led many Christians to overlook his personal flaws, and and his past support of abortion more than two decades ago before he was swayed to the the pro-life cause by a friends who chose to keep their Down Syndrome child rather abort the baby. Trump has said his mind was changed watching that child grow into a “beautiful” person and the experience impacted him deeply.

Trump “has never tried to act like a pastor,” White-Cain said “Let me tell you, he ain’t ever going to be like one.” Ralph Reed, who founded the Faith & Freedom Coalition, implied that God ordained Trump, “with his imperfect past and with his personality,” to the White House.

The Evangelicals For Trump coalition was launched in January to encourage Christians to reelect the president to a second term.

Trump is currently polling at the highest enthusiasm rate among Republicans of any president in modern history and his support among Christians remains near the level during the 2016 election.

Previous: Man’s Greatest Folly: Believing in Man, instead of God
Next: Billy Graham statue will be added to Statuary Hall in U.S. Capitol