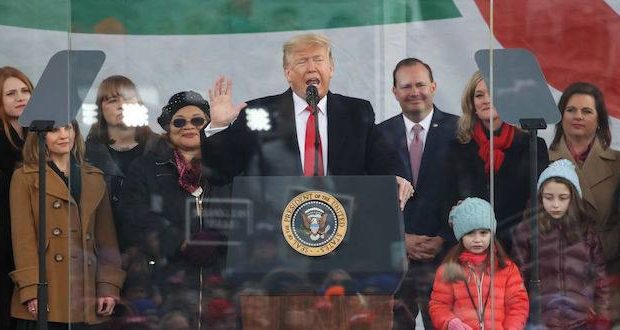 President Donald Trump’s re-election campaign got a big boost last week with a large pledge from a leading Christian organization.

The Faith & Freedom Coalition promised to spend $50 million and reach 22 million evangelical, Catholic and pro-life voters as part of a digital and grassroots campaign to highlight Trump’s accomplishments and re-elect him this year, according to Christian Headlines. The organization, founded by Ralph Reed, launched the campaign Wednesday, calling it the “largest pro-family voter education campaign in modern American political history.”

VIDEO: Who is the Faith and Freedom Coalition?

It released a two-minute digital ad, “Promises Kept,” that opens with images of Trump becoming the first president to appear at the March for Life. But it touches on other issues, too, including the economy, criminal justice reform, religious liberty and federal judges. The ad calls Trump the most “pro-life,” “pro-family,” “pro-religious freedom” and “pro-Israel” president “in history.” It ends with the tagline: “Promises Made. Promises Kept.”

While Christians support the re-election of the President for a wide range of issues, it is the abortion issue that drives many to vote.

At the National March for Life in Washington recently, President Trump recounted his administration’s accomplishments for the pro-life movement, including restoring the Mexico City Policy to block federal funds for organizations that perform or promote abortions overseas, issuing new Title X rules that prevent family-planning clinics from referring or promoting abortion – a rule that has resulted in Planned Parenthood losing much of its government funding, and nominating more than 180 federal judges who “apply the Constitution as written.”

Trump also blasted Democratic politicians on the issue of abortion.

“Democrats have embraced the most radical and extreme positions [ever] taken and seen in this country for years and decades,” he said. “Nearly every top Democrat in Congress now supports taxpayer-funded abortion all the way up until the moment of birth.”

He also told the crowd: “They’re coming after me because I am fighting for you.”

“In 2016, Donald Trump won 81 percent of the evangelical vote,” said Timothy Head, executive director of the coalition. “At that time, many evangelical and faithful Catholic voters did so on faith. Now, there is an impressive and historic record of accomplishments. These are promises made and promises kept, not only to the faith community, but to the American people. That’s a message we will ensure every faith-based voter in every key state and congressional district gets between now and election day.”

READ: Leaders say Evangelicals will once again vote for Trump

Technically, it is an education campaign and not a re-election campaign, but the effect largely is the same: