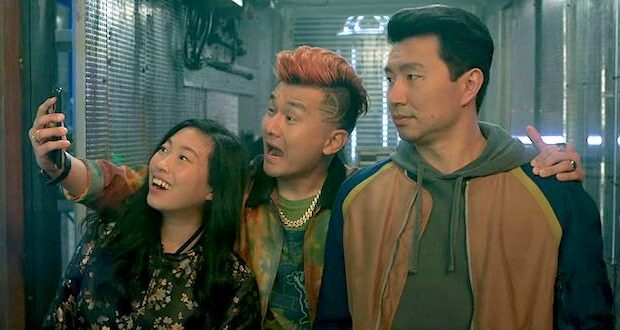 Shang-Chi and the Legend of the Ten Rings, is the latest superhero blockbuster from Marvel.  Here’s a quick peek at the movie’s biggest theme: It’s all about family. While Shang-Chi—like any superhero worth his or her salt—has to save the world, he also has to come to terms with his prickly, messy nuclear unit, and come to terms with who he is as a part of it.

This isn’t anything new for the Marvel Cinematic Universe. A couple of years ago, I wrote a blog all about it. But given the strong familial ties we see in Shang-Chi, and the equally prickly, powerful family messages we just saw in Black Widow, it got me thinking: What movies in the MCU feature the strongest messages about family? What films give us a look at how important—for better or worse—a family can be?

Here’s what I think—in the order in which they were released. All the films listed are, of course, PG-13, so be sure to check out our full review before queuing them up.

Thor (2011): Forget about the frost giants and the massive fire-shooting robot. The first Thor movie is really a family drama with horned helmets and capes. Thor, our titular hero, isn’t so heroic as our story begins. In fact, he’s a bit of a spoiled man-child—so much so that his father Odin expels the lad from Asgard to Earth, hoping he’ll learn a lesson about humility and what it really means to be a hero. Meanwhile, he’s also dealing with his other son, Loki, who learns he’s adopted and is none-too-happy about it. “You’re my son,” Odin pleads, and we in the audience knows Odin loves both of his boys—struggling like crazy to mold them into the men he wants them to be. But as every father knows, it’s a tough job. And while one comes to realize that he needed a little tough love, the other takes a bit longer—several movies, in fact—to come around.

Ant-Man (2015): if Thor was about a wayward son, Ant-Man is about an imperfect dad trying to make amends. Newly released ex-con Scott Lang is trying to go straight (sort of) when he receives an unusual offer from brilliant scientist Hank Pym: Steal a bit of high-tech shrinking stuff, lest it fall into the hands of evildoers. Scott agrees, but his real motivation throughout the movie is to be the sort of father that his daughter, Cassie, can be proud of—and that means more than shrinking to the size of an ant, but being willing to sacrifice everything to save his little girl. He learns a lot about what it means to be a real father in this flick—and so can we.

Guardians of the Galaxy Vol. 2 (2017): The Guardians of the Galaxy films are saturated with familial themes, from Gamora’s very difficult relationship with her adopted pops (Thanos) and jealous sister (Nebula), to Drax’s quest to avenge his own murdered clan, to the whole crew forming their own sort of family. But this movie rises above its predecessor (at least for this list) because of Peter Quill’s dads. Peter’s birth father—a god-like being tellingly named Ego—re-introduces himself to Peter and asks him to join him in a massive galactic project he’s working on. Peter is thrilled to meet his birth dad at first; the guy who raised him, Yondu, is a literal space pirate. But as the story goes on, we realize that Yondu—for all his imperfections—loved Peter far more than Ego does, or even could. Strip away all the zany CGI and action comedy, and you find that a beautiful message of adoption lurks inside—that your real parents are the folks who raise and love you. And that’s nice to see.

Black Panther (2018): If Peter Quill’s adopted dad was a bit of a mess, T’Challa’s pops was practically a picture-perfect father, worthy of respect and admiration. Or so T’Challa believes. But when M’Baku—a cousin that T’Challa didn’t even know he had—returns to the kingdom of Wakanda to claim the throne and spills a bunch of messy secrets, T’Challa must deal not just with this new adversary, but his dad’s own tarnished legacy. And in order to save both his kingdom and the wider world, he must eventually rely on a sacrifice from his own mother and, of course, his very brilliant sister. Black Panther, the first superhero movie to ever be nominated for a Best Picture Oscar, speaks profoundly to the power of family—even if that family proves to be not quite what we once imagined it to be. And it reminds us that we carry our family with us always, even when we can’t see them anymore.

Black Widow (2021): Mothers sometimes get a bit of short shrift in the MCU (at least according to this list), but not here. In Black Widow—where we meet Natasha Romanoff’s very dysfunctional—and very fake—family, Mom takes center stage. Melina Vostokoff served as “Mom” to both Natasha and Yelena, back when they were working undercover in the United States. And while their picture-perfect Ohio family was, technically, a façade, turns out even fake blood is thicker than water. For younger daughter Yelena, that faux family (filled out by father Alexei) was the closest she ever came to one. “The best part of my life was fake,” she laments. But the love she felt was more real than she imagined—and some of the lessons that Melina instilled in her girls prepared them well for life’s hard realities. By the end of the movie, both Natasha and Yelena realize that their “fake” family wasn’t so fake after all.

And there it is—five MCU films that, deep down under all the blockbuster bombast, are really all about family. Would love to hear about some of the superhero movies that you feel might have a great family component to them. Talk about ‘em below or let us know on social media. Your Plugged In family is always ready to listen.

Previous: At least 12 US service members killed in Taliban attack
Next: How the Taliban and ‘woke culture’ both erase women